Grant Clitsome put up some good numbers in the 2012-13 lockout-shortened season. The blue liner posted 4 goals and 12 assists with a +10 plus/minus and a 50.4 Corsi%. This led to a nice raise and 2.07 million dollar caphit for 2013-14, with two more years in term afterwards. Unfortunately, a severe back injury cut Clitsome's 2013-14 season short, but let's take a look at what we can.

For the second season in a row, Grant Clitsome posted the third best points per minute of all the Winnipeg Jets defenders. The offense primarily comes from set up plays and moving the puck forward, as Clitsome doesn't produce the shot volume levels of Dustin Byfuglien, or even Jacob Trouba and Zach Bogosian. After a very high shooting percentage in 2012-13, Clitsome's percentages fell back to his career norm.

Grant Clitsome received the cushiest minutes of the Jets big minute defenders. Clitsome was deployed in the offensive zone and played with the Jets top lines more so than either of the previous two seasons. He saw an increase in even strength and power play time on ice, but a reduction in short handed minutes. 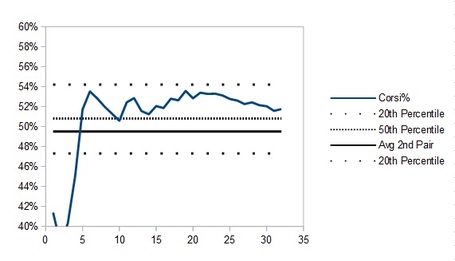 Clitsome's 5v5 TOI was typical of a 2nd pair defender, and his Corsi% was above average for both his TOI and his usage. The numbers indicate that Jets have been very, very effective in shot creation with Clitsome on the ice, but subpar in shot repression... not surprising for Clitsome's game, nor for someone who spent near 290 of his 500 5v5 minutes with Byfuglien (but we'll expand on this later).

Fan perceptions often follow PDO, and Clitsome doesn't seem to be an exception to the case. There was hope that Clitsome could be the fourth component missing in the Jets top 4 defenders after posting a team best plus/minus in 2012-13; however, there seems to be less talk after this season. Arctic Ice Hockey community member RyderN17 posted this in the Byfuglien section, alluding to the change in perception with the dramatic drop in on-ice save percentage:

Clitsome has quietly grown into a versatile and effective player for the Jets. While he is unlikely to ever be a player that can take the bulk of tough defensive zone minutes, he can play effectively in particular roles. Given a minimal offensive zone push, Clitsome can continue to provide offense while also eating minutes. In addition, Clitsome can also play both sides of special teams.

Just after the extension of Mark Stuart, AIH author Truck noted that the Jets defensive-core is starting to fill up, with a lot of players with 1-way contracts with term and very little wiggle room. Unfortunately there is a noticeable hole in the Jets left side defensive depth between Tobias Enstrom and Mark Stuart. If the Jets fill that hole through UFA or trade, they could end up allocating 4.7 mil in CapHit to their 3rd pair. There is also the added concern on how Clitsome will recover from his back injury.

There is one problem with the underlying statics today and that lies in determining cause and effect. We look at how a team's results change while a player is on the ice and assume the player is the cause. This may not always be the case; however, there are ways to deal with the issue of determining who is driving the boat. The two most common ways are WOWYs (with or without you) and increasing sample size.

Clitsome has played a lot of his minutes as a Jet with Dustin Byfuglien, a well known driver of puck possession. Nearly 50% of Clitsome's 5v5 TOI has been with Byfuglien and there is a pretty significant difference in results between the two:

Now these comparisons are not exactly apples-to-apples, as usage affects likely arise. Both with and without Byfuglien, Clitsome has similar offensive zone deployment, but with Byfuglien both QoC and QoT increases. With Byfuglien, Clitsome saw a lot of TOI with Andrew Ladd, Blake Wheeler and Bryan Little, a very good possession unit.

dCorsi does indicate that Clitsome is driving some of the possession himself, and out performing his usage; however, Byfuglien may be playing a role in this as well. dCorsi likely underestimates the contributions of Byfuglien as a linemate. Byfuglien was Clitsome's most common defensive partner, but a good portion of Byfuglien's minutes away were as a forward, where Byfuglien does not push the play as well.