Dustin Byfuglien could contest for the Winnipeg Jets most controversial player. He is a fan favourite and has the ability to change a game at a moments notice, but not always for good.

Byfuglien had a strong year for offensive production, despite playing his lowest TOI per game as a Jet.

Some of this improvement comes from his highest shooting percentage over the last 4 seasons. A portion of Byfuglien's shooting percentage increase likely arises from playing games as a forward, which allows for shots closer to the goal. Although, during Byfuglien's 10 goal and 12 assist tenure as a forward, 3 goals and 7 assists occurred on the power play (and Byfuglien also played defense for 4v4 situations).

Byfuglien wasn't deployed extensively in the defensive or offensive zone more so than the other. He did however face the other team's top lines more than anyone not named Tobias Enstrom.

Big Buff's even strength ice time was severely cut with his games played as a forward, but he was rightfully the leader in power play time. As a defenseman, Byfuglien played a career high of short handed minutes, and wasn't terrible at it. 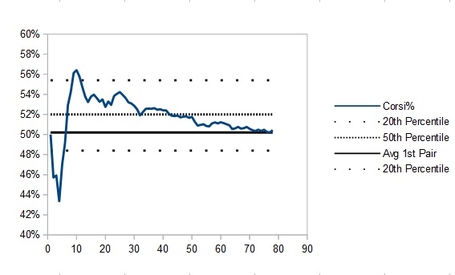 At 17.01 5v5 minutes a game, Byfuglien played within the typical minutes of a top pair defenseman, while the Jet defender performed above average for most of the season. There is a significant trend downwards though, especially after his change to forward.

Byfuglien's team-low plus/minus was the focal point of much scrutiny, but Tyler Delow has shown that goal% (5v5 +/- in percent form) tends to regress towards a player's Corsi%. In other words, the discrepancy between Byfuglien's plus/minus and Corsi is most likely "bad puck-luck" driven. This seems even more likely when considering over the previous 3 seasons combined Byfuglien actually had the second best Jet/Thrasher 5v5 goal differential.

dCorsi shows that Byfuglien has excelled in creating shot volume although is not one for repressing opponents chances. In the end, Byfuglien causes more good than harm, contrary to some individuals belief.

Dustin Byfuglien is a pretty rare breed. He is a very big body that can move the puck well and is an elite offensive talent. He generates a huge volume of shots but has issues in his own zone. He is the embodiment of a famous quote from Dave Tippet.

There are a large number of variables that affect this choice. Byfuglien is probably the Jets best trade piece given his abilities, versatility, value, contract, age, and depth behind him - the Jets right shot defensive depth is impressive, or at least relatively so-. Also, Byfuglien can play the wing well -a position the Jets are not so endowed with in depth- while still playing point on the power play -a power play that is quite empty without Byfuglien-.

Bonus: Dustin Byfuglien the defender versus the forward 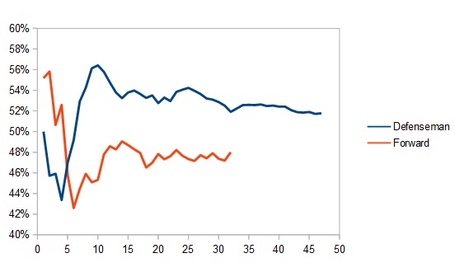 The y-axis is given to show the typical 40-60 sustainable Corsi% spread seen for NHL calibre players. The x-axis is number of games played.

This speaks volumes. In the long run, the Jets will be outscored more for minutes with Byfuglien on as a forward than a defenseman. In fact, with better goaltending, Jets would likely significantly outscore their opposition. This past season we saw saw Byfuglien with severe negative numbers in both situations.