Zach Bogosian entered the 2013-14 season as one of three Winnipeg Jets on the books with a new big money extension. With the big ticket came big expectations. Did Zach Bogosian meat the new set of expectations that the team put forth?

A few numbers here stand out. 55 games played is bad, especially as this looks as though it is becoming a pattern. Over the last four seasons Bogosian has missed 11, 17, 15 (of 48) and 27 games played. Going forward, his health is a bit of a concern.

Another oddity in these numbers is the point totals. 11 points is a career low for Zach Bogosian. Missing 27 games was a factor, but Bogosian has previously scored 19 points in 47 games played. He has also scored 30 in 65 and 14 in 33. This was clearly a down year. His shooting percentage of 2.2 surely didn't help in this regard. 3 goals in 134 shots likely isn't sustainable though.

Injuries, Dustin Byfuglien moving to forward, and a coaching change resulted in very inconsistent usage with Winnipeg Jets defenders. Still, we can look at the trends and overall net usage.

While Zach Bogosian was given first pairing match-ups for part of the season - along side Tobias Enstrom - he was on average deployed like a second pairing defender. He faced tough match-ups, but not the toughest. He received middling zone starts with a push towards the defensive zone.

Interestingly, Bogo led the team in 5 on 5 ice time percentage, but was relegated to second pair ice on both special teams units. 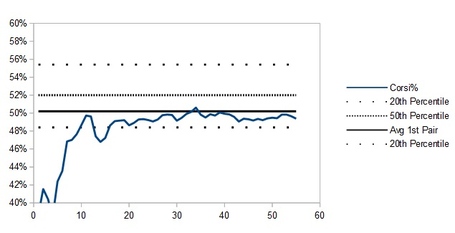 The y-axis is given to show the typical 40-60 sustainable spread seen for NHL calibre players. Players are compared to particular line/pair depending on 5v5 TOI per game. Population mean (average), median (50th percentile), and other percentiles are relative to player performances between 2007-12.

Zach Bogosian's Corsi numbers were pretty consistent throughout the season - hovering at just below 50%. That isn't bad, but it is far from ideal in a big minute defender. This isn't new though, sub par possession stats have been the case for most of Bogo's career.

Things get really interesting when we take a look at the dCorsi numbers. These numbers have told an interesting story about Zach Bogosian for a number of years now. Contrary to common perception, the numbers suggest that it is the defensive side of his game that is dragging him down. Zach Bogosian has long proven to be an above average offensive defender, but also a well below average shot suppressor.

The fact that Zach Bogosian continued to be deployed in a shutdown role despite years of below average defensive numbers makes him an interesting case study. Will this deployment continue under Paul Maurice, or was this Claude Noel specific?

Zach Bogosian is under contract with the Jets for years to come. They are going to keep him. It will be interesting to see what kind of return Kevin Cheveldayoff gets on his investment.

Bonus: Where did Bogo's O Go?

If Zach Bogosian truly is an offensive defender he will need to score to be effective. He has scored in the past, but that vanished this year. Where did his offense go?

Across the first 5 seasons of his pro career Zach Bogosian's counting stats have been a bit up and down, but counting stats don't tell the whole story. Zach Bogosian has been relegated to the second unit powerplay time due to a couple monsters holding down depth chart spaces ahead of him. This puts him at a disadvantage relative to his peers.

5 on 5 per minute scoring are where Zach Bogosian shines. In three of his first five NHL seasons Zach's 5v5 scoring rates have placed him within the NHL's top 20 defenders (min 750 minutes played / 400 in the lockout year). This year Bogosian fell to 145th out of 164 qualified D men. This isn't all on Bogo; there is more to the story.

Scoring rates are highly variable - especially when we are talking defenders who don't log prime powerplay ice. Shot production on the other hand tends to remain more consistent year to year. As we saw above, Zach Bogosian remained a prolific shooter. A poor shooting percentage very clearly robbed him of some points, but there is one more number that stands out.

That stat is Individual Points Percentage (IPP) and it is tracked conveniently by stats.hockeyanalysis.com. IPP is defined as The % of goals scored while player was on ice that the player had a point on. This year Zach Bogosian recorded a point on 19.5% of the goals that were scored with him on the ice - over his career that number is 31.9%. In each of the last two seasons, Zach Bogosian's IPP was over 40%. Some of the change in this year's numbers can be attributed to his low shooting percentage. Some of it is little more than dumb luck.

Odds are some of the offense will come back next year. Thusly he may be worth a look in the late rounds of fantasy pools.

For Fun: If you don't believe all of this Zach Bogosian - offensive D man stuff (or if you do), I implore you to check out this list of the NHL's most prolific shot attempt producing D men (5 on 5, minimum 3000 minutes played) over the last 6 seasons.