Preview: Sidney Crosby and his Pittsburgh Penguins roll into to to face Winnipeg Jets

Leading the NHL by 16 points Sidney Crosby comes to Winnipeg for the first time in 2013-14. Jets extremely slim playoff hopes ride on the game.

Share All sharing options for: Preview: Sidney Crosby and his Pittsburgh Penguins roll into to to face Winnipeg Jets

While most everybody has counted the Jets out of the playoff race, mathematically the Jets still have the faintest hope.  That hope could be over tonight.  With a Jets loss against the Penguins and a Dallas win over Carolina tonight, the Jets would be eliminated for good.

After getting 5 points in 4 games in a road swing through the heart of the Pacific Division in Arizona and California it's clear the Jets are not quitting.  Particularly the Captain, Andrew Ladd, who has been red hot of late with 6 goals in the past 10 games.  Scored the only Jets goal in their last outing against Phoenix and added the shootout winner.  Ondrej Pavelec made 28 saves in his first win since March 1st.  The Jets appear to giving some young guys a look with Eric O'Dell continuing to get meaningful minutes and has 2 assists in the past 3 games.  Paul Postma has played over 20 minutes in each of the past 2 games after not getting above 18 in any of his other 13 games this season.  Zach Redmond has dressed in each of the past 2 games, getting a season high 16 minutes last game.  Jets are looking to next season already, auditioning players for jobs.

Meanwhile, Pittsburgh  has already locked up their division and are cruising into playoffs.  They have lost 4 of their past 6 games while scoring just 11 goals in that time.  Sidney Crosby has cracked 100 points on the year while nobody else has more than 84.  They are without two of their top players with both Evgeni Malkin and Kris Letang, both are out with injuries.  They are coming off a 4-1 loss against the Carolina Hurricanes.  This is the start of a 3 game road trip through the Central Division for Pittsburgh.

3 Keys to the Game

1) Crosby: Heart of the Penguins and easilest the NHL's best player, he will be the key to any game he plays in.  Jets lack of a strong centre to match him up against is a problem but the job will likely fall to Bryan Little.  Controlling the corners against Crosby is nearly impossible, but Little, Enstrom and Trouba will have to try at least somewhat.

2) Goaltending: Pittsburgh's goaltending is average at best and we all know about Ondrej Pavelec.  Pavelec will need to play a solid game against the dynamic Penguins.

1) Stay Healthy: Down 9 points on the Bruins for the conference lead and already clinched the Metropolitan Division the Penguins care little for the game other than stay healthy.

2) Cycle Quick: The Jets are running some weak players on the blueline (Adam Pardy, Mark Stuart) and inexperienced guys (Postma, Redmond) so establishing a cycle game will likely lead to mass confusion in the Jets end of the ice.

3) Drive the Net: Pavelec loves those juicy rebounds, just get there.

James Neal.  For this. 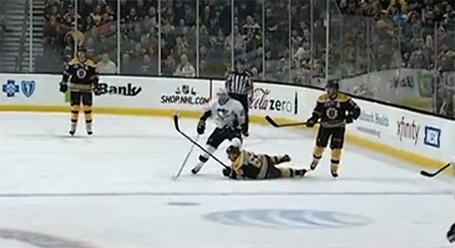