Do the Winnipeg Jets play down to their competition?

A by the numbers look at how the Jets perform relative to who they are up against.

Share All sharing options for: Do the Winnipeg Jets play down to their competition?

Whether on twitter, radio or message boards, every once in a while some one says that the Winnipeg Jets play to their competition level. "They seem to match up well against the best, but underestimate the weaker teams".

But is this true?

A team's Score-Adjusted Fenwick is the best team strength metric currently known. It beats other score-situation Corsi/Fenwick measures (tied, close or all minutes) for predicting future win%, and Corsi tied is already known to surpass past goal differentials or win% at predicting future win%.

Some games were removed as score-close situation lasted less than 15 minutes.

Well from this it looks like the answer is no.

*Extra note number one: The only team at 50% for S-A Fenwick is in fact the Jets themselves; therefore, this not only shows Jets against above/below league average teams, but also Jets against teams "superior" and "inferior" to them.

*Extra note number two: The fact that the Jets have a negative goal differential against inferior teams is just sad. This is mostly due to goals against. To check out why read this.

Most teams though are close to 50% in S-A Fenwick. In fact, 14 teams currently reside withing 48-52%. So, this may not effectively show the relationship of the Jets performance relative to their opponents level. 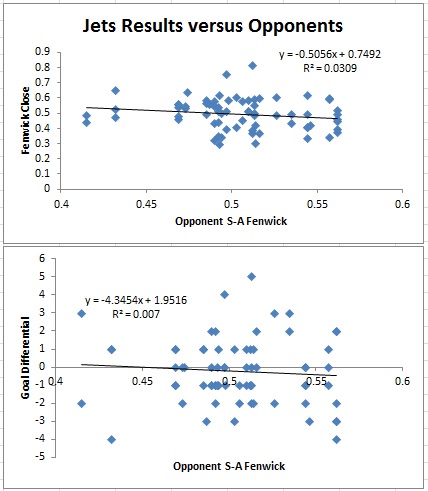 It appears the relationship is quite weak. While the Jets do indeed perform better on average against better teams in both carrying the play and goals, there is a lot of randomness in the results. Part of it is just the fact that players are not robots. While the extent -or lack thereof- in consistency between teams is pretty universal, no one is perfectly consistent.

This likely accounts for a large part of this perception. People may remember the 2 goal win over Chicago over the two 3 goal loses and one 4 goal loses. Likewise, the opposite may apply with the one 4 goal lose against Edmonton than the two one goal wins.

Another hypothesis to this perception was that perhaps this arises from score effects. However, the line of fit is nearly identical (y = -0.5086x + 0.7556) with a slightly better R2 (0.0611) when changing from Fenwick-Close to Corsi for all minutes.

The best part of quantitative analysis is myth busting. When you hear an opinion or come up on one of your own, you test it against what the numbers say. If they match, you can feel a bit more confident in your opinion. If they don't match, then you know to investigate in both your opinion and the numbers more to figure out where and why there is a disconnect.

Overall it seems the Jets have larger fish to fry than them playing to their opponent.

It was asked on twitter whether things changed when looking at the standings, to take account for psychological effects on either the Jets or the fans.

In addition the Jets gave an inferior goal differential per game, win% and average Fenwick-Close on playoff teams over non.