The cadaver may have been warm only moments ago but the time is right for Arctic Ice Hockey to begin its autopsy of the Winnipeg Jets. We begin our investigation with evaluating the organism's functionality as a whole relative to its peers.

It is true that numbers do not give the whole story; however, they are still effective indicating trends on what has occurred and what will likely happen in the future.

Underlying numbers are not necessary to describe the 2013-14 "playoffs or bust" season as a disappointment, but they are a good place to start.

Once again, Jets fans find themselves watching other teams extend their seasons into the spring. The Jets have yet to make the playoffs since their relocation and only once in the entirety of franchise history. The Winnipeg Jets / Atlanta Thrashers have yet to win a single playoff game; an unique feature in the NHL.

With 84 points, the Jets finished 22nd in the NHL and last in the Central Division after spending $93 million on extending core pieces, as well as three draft picks on acquisitions Michael Frolik and Devin Setoguchi.

It could be argued that there is some poor puck-luck with the Jets final position in the standings; their 19th best goal differential indicates the Jets underperformed their Pythagorean Expectation.

Figure 1: 2013-14: Jets basic statistics throughout season for all minutes 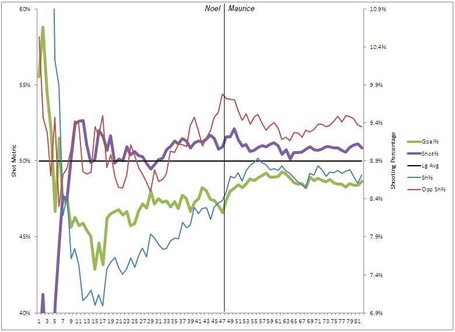 Numbers are cumulative for all situations. Vertical axis' min/max is set to the normal spread seen between teams over a season.

The Jets have been pretty consistent in outshooting their opposition.

Figure 2: 2011-14: Jets basic statistics throughout existence for all minutes 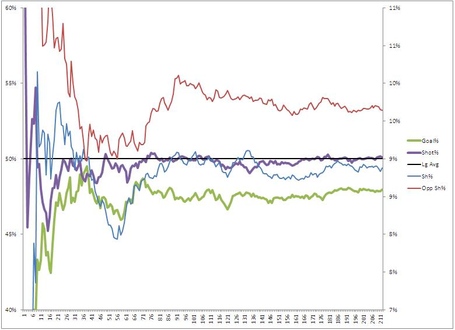 The pattern previously seen with Jets with shots, goals, shooting percentage and save percentage has been the on-going story for most of the team's duration in Winnipeg.

As with the last two graphs, the vertical axis min/max is specifically chosen to fit normal spread seen throughout season between teams.

Partway through the season Claude Noel started to concentrate more on shot repression, sacrificing shot creation. This was taken even further after the change in coaching to Paul Maurice.

Shooting and save percentage is for all minutes; Fenwick is for 5v5 only.

Save percentage is not the only problem facing the Jets, and every fan already knows this. While the Jets do create a high number of non-blocked shot attempts (5v5 FF/60), they also give up a lot (5v5 FA/60). Some of this high-event hockey may come from being a team that spent 306 more 5v5 minutes being behind than ahead, although likely not much.

Not all is gloom and doom. The best evaluator for a team strength (although excluding goaltending and special teams) is score-adjusted Fenwick. Jets actually placed 14th in the league here. Only four teams in the top 15 for S-A Fenwick missed the playoffs this season. Interestingly three of them (Vancouver Canucks, New Jersey Devils and Winnipeg Jets) posted a 0.907 save percentage and the fourth (Ottawa Senators) posted a 0.909.

Special team index (SpTm%) is simply a team's PP% + PK%, where the average team would be around 100%. The Jets 98.6% SpTm% is made worse with them taking 32 more penalties than they drew, which was the third worse differential in the league.

Is this improvement or have the Jets been stagnant over the years? Well...

The Jets have not made much headway since moving to the "Gateway to the West" from Atlanta, although some of this could be with the Jets transitioning to a much younger team.

There is a lot of parity in the league, and therefore it does not take much change between the non-extreme placements.

All numbers are for even strength only.

The NHL tracks the x,y coordinate of shots. While the precision of such information is infamously terrible, it does an okay job in differentiating high and low quality shots. Approximately 13.8% of shots from the "scoring chance area" end up goals, while only 2.7 of "non-scoring chances" do the same.

As has been previously noted before in many other studies, the amount of information that is added by including shot quality is noticeable but not extraordinary. It should be also noted that Jets were near league average in percentage of shots that were scoring chances in both cases. 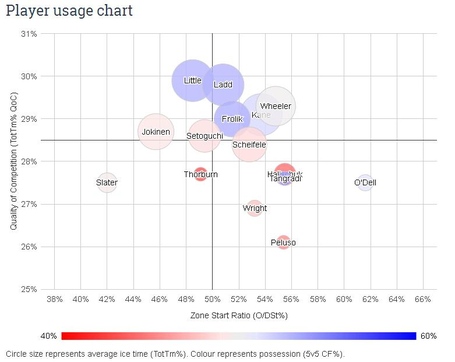 The Jets have some dead weight that should be moved. Future pieces of this seasonal review series will go over each player individually and how they performed relative to usage. 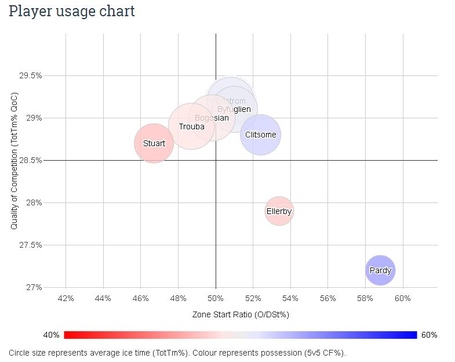 Unlike the forwards, the Jets defensive problems is less a need to replace deadweight and more needing one more heavy lifter to slide some defensemen into more appropriate roles. Again, this will be covered more later in the series.

Jets missed the playoffs again and a good portion of it is deserved from their performance. There are many areas that could use improvement but the most pressing is save percentage, suppression of non-blocked shots against, special teams and penalty differential.

All numbers are from Extra Skater, Behind the Net, Super Shot Search and Hockey Analysis