Winnipeg Jets and the elusive goal of depth

Taking a look at the Winnipeg Jets relative to some of the deeper rosters in the NHL.

Share All sharing options for: Winnipeg Jets and the elusive goal of depth

I've long thought that there were three main differences between the Winnipeg Jets and some of the better teams in the league. No not leadership of the Atlanta Five. No not a lack of a winning culture atmosphere. Not the Jets best players needing to be better. Not work or effort. Not showing up for the big games.

Goaltending has been beaten to death and I've promised myself I wouldn't write about it as much as possible. Returns are early but promising for #3 under Paul Maurice. While his player usage may or may not be perfect (plus I don't think anyone's is or would be), the Jets have improved their shot metrics under Maurice while under a more difficult Quality of Competition schedule.

Most of you are probably smart enough to know what depth looks like on ice or on paper, but it is another thing to quantify what it looks like in the results, ie: the numbers. Extraskater gives some visualization to these numbers with player usage charts.

Here are a few teams well known for their strong depth. 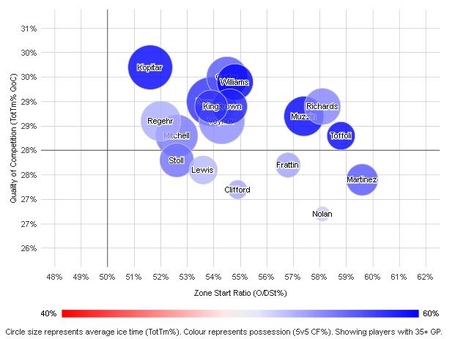 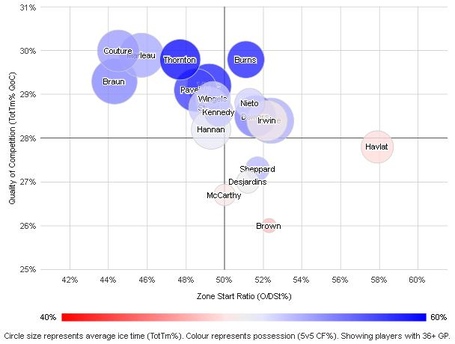 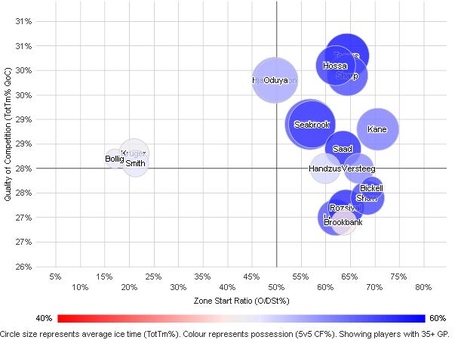 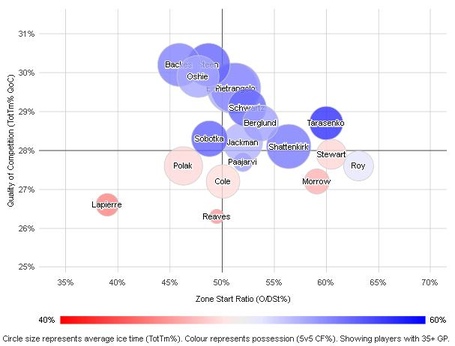 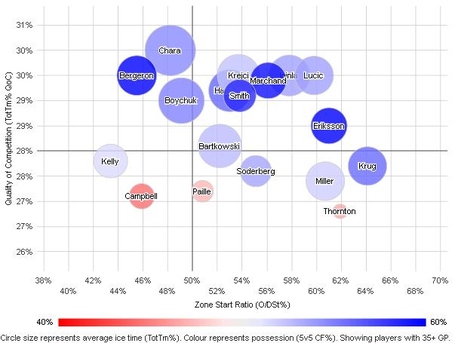 Winnipeg Jets over the years

Of course, all things need a reference point in order to compare so here are the last three seasons for the Jets. 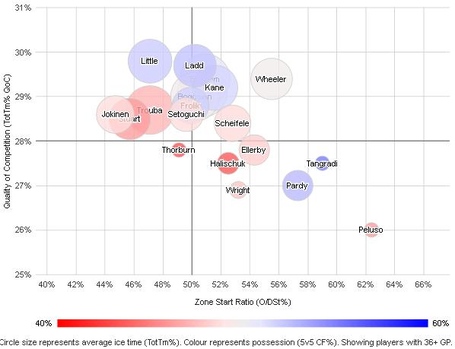 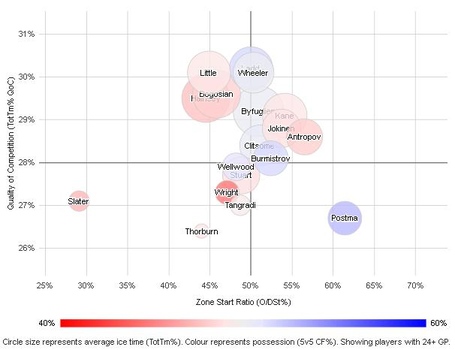 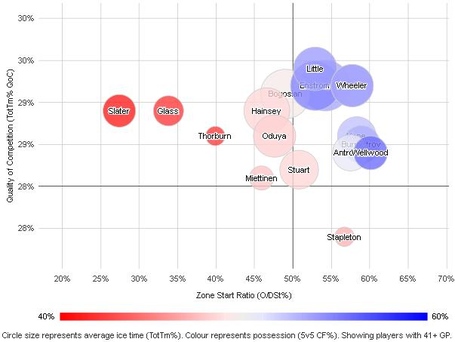 Yes, it is true that it isn't as simple as saying "I want to improve my team" and presto: depth magic. This article is not going to go all #whatdidchevydotoday at all. Rather, just give a visual link to the numbers and a concept that I'm sure most Jets fans already know; we need more good players.

The Jets will likely never be built on superstars, but they can do well in improving their depth. Acquiring more good players creates a domino affect; basically, "more blue bubbles beget more blue bubbles" (quote: Tim Bonnar). One of many examples of this is that a team with more depth will start a greater percentage of their shifts in the other team's zone. Look up at Los Angeles Kings' O/DSt% for their players for an extreme version of this. On average, more zone starts in the other team's offensive zone will improve a player's Corsi% and, more importantly, the probability of positive goal differentials.

It is also true that it is not as simple as merely drafting well will fix all your problems. Excellent drafting teams gain two NHL regulars on average per draft. New players coming in have to also make up for regression with age of older players. In addition, as your team improves in the standings, the probability of getting above average players diminishes quickly with later draft selections. Yes, there are examples of outliers, but the trend remains true. Yes, drafting is a large component of improving the team but not the only.

This is merely the introduction. At the start of the summer, I will be going over each individual Jets player's performance analytically with the context of this article and need in mind. Then when we are done for that series, I have a few pieces on pieces Kevin Cheveldayoff may be able to realistically acquire in improving the Jets. This will be a big summer for Chevy and TNSE.

Until then, what are some of your thoughts?