The regular season is over in the CHL so we will take a look at how our potential future Jets have fared.

Reconstructive surgery on Lukas Sutter's shoulder has sidelined the former second round selection for the remainder of his CHL season. This has ended Sutter's junior career with now no where to go but to pro. This season saw Kevin Cheveldayoff sign Entry Level Contracts to Scott Kosmachuk, Joshua Morrissey, Nic Petan, Axel Blomqvist and Ryan Olsen, so the only question that remains is whether or not Sutter will also be signed.

Sutter finished 10th on his team for points per game.

Scott Kosmachuk finished off the year strong, scoring at near a 1.8 points per game pace for the months of February and March. Kosmachuk's Draft+2 NHLE production of 0.441 is second only to Mark Scheifele's 0.521 for Jets prospects, just pulling ahead of Ivan Telegin's 0.417. Guelph is one of the favorites for the Memorial Cup and Kosmachuk will have a big role to play in their team's playoff success. If Kosmachuk doesn't make the Jets (most likely), the Jets AHL affiliate will be receiving a treat in Kossyboy.

Kosmachuk finished the season third in the OHL for points, tied for second in goals, seventh for goals per game, and tenth in points per game .

Ryan Olsen's production has only modestly increased from his previous season. Still, he is the second highest scorer on the top ranked team in both the WHL and CHL. Olsen predominately played the season on the second line playing a tough defensive role (and excelling in it), with some injury coverage on the first line. While his goal scoring has gone down a bit, this is likely due to Olsen's goal scoring being inflated on the power play last season. Last year 15 of Olsen's 32 goals were on the power play; this year 8 of 30 were on the power play.

Olsen finished the season second on his team in both points and goals, and tied for fourth in points per game.

What a season, with finishing nearly double the points per game as the year prior. Morrissey's 0.309 Draft+1 NHLE is the second highest Jets prospect NHLE for defenseman yet; the only two to ever place in the .3's were Kichton (0.316 in Draft+1) and Postma (0.300 in Draft+2). Together with Leon Draisaitl, Josh Morrissey placed his team on his back and carried them into playoff possibilities. Due to tying Red Deer Rebels, the Prince Albert Raiders played a single game elimination tournament last night for which team goes into the playoffs. The Raiders came out with the win, with Morrissey getting an assist on the game winning goal and scoring on the empty net for extra insurance.

Morrissey finished the season first in the WHL for goals and second for points by a defenseman. He was also first in both goals and points per game.

Fun factoids: one of either Morrissey or Drasaitl (or both) connected on 58% of PA's points, Draisaitl assisted on 69% of Morrissey's goals, and Morrissey assisted on 42% of Draisaitl's goals.

Nic Petan had an uncharacteristic month of March, with pacing under a point per game, a minus +/-, and high PIMs per game. He ended up losing the scoring title by five points, although with nine less games played. Despite a slow March, Petan still finishes with the highest Jets prospect Draft+1 NHLE production at 0.448, with Scheifele being the closest at 0.402 at the same point. Even more-so than Morrissey, there is not much left for Petan to prove in the WHL at an individual level although it is uncertain if he will be physically read for the NHL next season.

Petan finished the season second in the WHL for points and first in points per game.

Eric Comrie may have only been the fourth highest drafted goaltender in the 2013 NHL draft (with Zach Fucale, Tristan Jarry, and Phillippe Desrosiers gone before), but he has the highest save percentage of the four this season and is tied with Jarry for highest junior career save percentage. Comrie has pulled his team into the playoffs, despite Tri-City having the 3rd lowest goals for in the league.

Comrie finished the season second in save percentage for the WHL.

This is a prime example of an up and down season. Jimmy Lodge went from struggling with injuries, to maintaining over a point per game for two months, and then crashing to less than half that for the next three. It is not completely known how much of this scoring drop is on Lodge; Truck and I have looked at player usage and the lines seem more jumbled than when Claude Noel brought out the kitchen mixer. Either way it is a stark drop in production, from pacing with players like Alexander Burmistrov and Mark Scheifele in his draft season, to pacing with players like Adam Lowry and JC Lipon this season.

Lodge finished fourth in team for points and fifth for points per game.

We said it would be unlikely that Jan Kostalek would sustain a 1.4 shooting percentage, and sure enough Kostalek scores 4 goals in the next 17 games. Kostalek's Draft+1 NHLE production of 0.123 is below that of former prospect Zach Yuen, but Kostalek is still showing more offensive promise than some of the Jets young depth defensemen, such as Julian Melchiori, Ben Chiarot and Cody Sol (in order of best to worst Draft+1 NHLE). While Kostalek's goal scoring has dropped, the fact that his assist production nearly doubled and his shot production went up by 50% (about a shot every 2nd game), is a promising sign that we may see a larger jump the next season.

Kostalek finished the season third for defensemen on his team for goals, points and points per game. He also finished second in first in shots on goal and second in scoring chances.

The Victoria Royals have been one of the hottest teams the last few months and Axel Blomqvist has a large role in that. Blomqvist this season has produced NHLE numbers between Olsen and Lipon; not bad for a non-drafted UFA signing. The big man plays a strong puck possession game in protecting the puck well. While he doesn't use his size to crush players, he does use it still to his advantage, setting up plays from the halfboards or down low.

Blomqvist finished the season third on his team for goals, points and points per game. 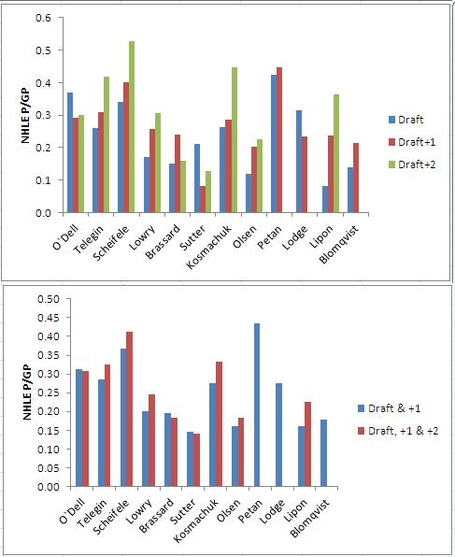 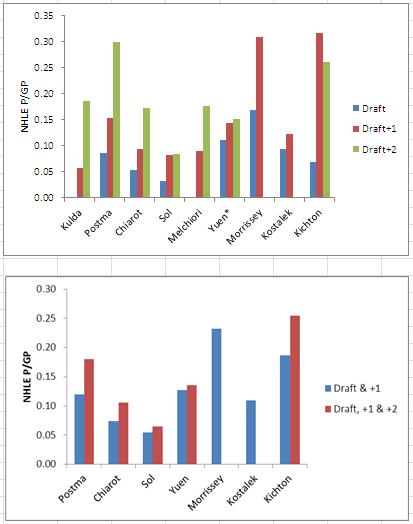 NHLE allow us to compare players of different leagues to look at their production. I usually use this to look at player development. The second image combines multi-years, which diminishes the effect of sh% variation, although also diminishes development.

1) Due to birthdate, Sutter and Melchiori are overage players in their Draft +2 year

2) Yuen is no longer Jets property, but I like to keep him on the graph to have more comparables