Paul Maurice versus Claude Noel in a battle of reality and perceptions, inputs and outputs

A quick peek at what is and isn't going on with the Winnipeg Jets with their two different coaches.

Share All sharing options for: Paul Maurice versus Claude Noel in a battle of reality and perceptions, inputs and outputs

First off, I want to speak informally and apologize. For those that care, I have been quite busy with combination of school, work, life, general laziness and also starting a new blog of my own for my non-Jets oriented work... combine all these factors and I haven't been able to write here as much as I would like. Now to business.

Over at Hockey-Graphs, I recently wrote on a piece in regards to the power of statistical analysis using inputs instead of outputs. This is what we do when we look at Corsi or Fenwick over plus/minus, save percentage over GAA or win percentage, etc.

As noted in the article, we have a psychological tendency to evaluate players via their outputs. The reason is two-fold, in that the outcomes are what you strive for and high-profile events hold a greater power in human perception and memory.

These tendencies remain true in evaluation of coaches as it does for players. So, without further delay, let's take a quick look at the inputs and outputs for Claude Noel and Paul Maurice. 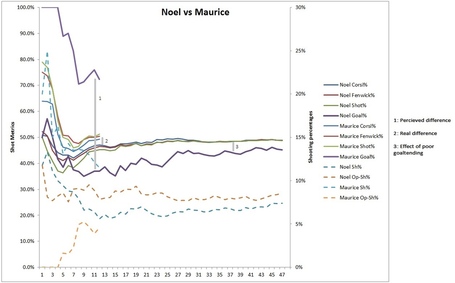 Click the graph for a larger and less distorted version; all data is for 5v5 score-close situations and from extraskater.com

There are quite a few interesting patterns that can be noted on this graph, some of which I have labeled:

1. The large grey line marks the 35 percentage difference between the goal% (essentially +/-) for Maurice's and Noel's Jets. This is why the Jets have won so many games over their opponents as of late, because they've out-scored the other teams by a lot (great and original analysis). However, this is just the output, which has created a perceived difference that may not mirror the reality in the difference of inputs.

2. The much smaller line is the difference in inputs between Maurice and Noel. Whether by shot attempts (ie: Corsi), non-blocked shot attempts (ie: Fenwick) or just shots on goal, the difference is pretty much similar. Now this isn't being pessimistic but rather realistic. We all know that the Jets current goal and winning differentials under Maurice were not stable. If they were, the Jets would then be one of the best teams in the history of the NHL. Still, the Jets have been a better team under Maurice, which is seen in the shot metrics being about 4% higher. For comparison, the difference between bottom and top teams in the NHL is usually about 15-20% in shot metrics.

3. The 3rd grey line is the on-going beating of a dead horse, showing how the Jets goaltending has led their performance to be below that than their inputs. While not an elite team, there is a visible drag from poor goaltending performance.

* The dashed lines show shooting percentages of the Jets and their opponents, which is just 1-sv%. We can see that a big reason for the Jets improved play as of late is a combination of the Jets scoring twice as often per a shot and their opponents scoring half as often per a shot. This difference is NOT sustainable. It will not persist no matter how good of system Maurice is running and you can see the regression occurring on the graph.

It's interesting that Maurice has gotten this much improvement in shot metrics while missing a top forward (Evander Kane), a top defensemen (Dustin Byfuglien), a lack of depth in defense (with Paul Postma and Grant Clitsome out), and a depth player on the second line (Chris Thorburn).

If Kane were to return, Byfuglien placed back to where he makes a more positive difference (or traded for equal value that could be deployed effectively), and the Jets underwhelming bottom pair improved upon, the Jets could become an above league average team.

Well... there still is that goaltending problem.