It's been over two months since our last look at the Winnipeg Jets prospects. Let's see how they have progressed since.

Samuels-Thomas has slowed down the goal scoring a bit but is still playing around a point per game. His shot generation is strong and consistent, so we should expect these production levels to remain.

The tall forward plays a power game and could even make noise on the Jets fourth line next season. If not, he will definitely be a fan favorite in the AHL next season. The Jets have until August 15, 2014 to sign JST to an entry level contract to retain his rights.

Note: Although Samuels-Thomas was drafted in 2009, he was eligible in 2008. Also, in 2011-12 Samuels-Thomas did not play due to NCAA transfer suspension (he changed schools).

Over two months ago we stated that if the shots kept at this rate the goals would slow down and the assists would come, and sometimes it sucks to be right. Given Lane's age, this amount of offense is quite low. His shot production has picked up, so hopefully this means more offense is on the way... He does already have a goal and assist this February.

Well, some offense has finally come to Stoykewych with four assists in January. Colorado College is having a rough year and is currently ranked last in their conference. Stoykewhych is fourth in the team for defensive points, behind freshmen Jacob Slavin and Gustav Olofsson, as well as fellow Jets prospect and junior Aaron Harstad. This is an unfortunate turn in progression for Stoyckewych, as he was looked to this season to be a leader offensively for Colorado. Sooner or later, one of those shots on goal has to go in, right?

In the third round the Winnipeg Jets have drafted Jimmy Lodge, JC Lipon, Scott Kosmachuk, Adam Lowry and Brennan Serville; one of these things is not like the other unfortunately. While Serville is most likely not the only one in this list who will not become a full-time NHL player, this is typically not the growth you would want to see out of a third round draft pick.

Kasdorf suffered a shoulder injury after playing one strong shutout game and one game where he bombed. He will not be returning this season. There isn't really much we can discover for this season with a nearly non-existent sample size. All we can hope is that Kasdorf recovers well for next season.

Meet the other top four left-handed shooting defensemen for Collorado College. Like the Jets other two NCAA defensemen, Harstad has been struggling to create offense, but at least Stoykewych and Harstad are 7th round draft picks. Harstad recently received a 5 minute major and 10 minute game misconduct for hitting from behind, and may miss a game or two for it.

Edit: It appears no suspension as Harstad played last night

While goaltender wins is a pretty weak statistic, it's pretty notable when a goaltender has one more shutout then loses in his entire collegiate career. What is not such a weak statistic though is save percentage; after leading the the league in save percentage last season, Hellebuyck is trying to repeat with currently pacing at 2nd in the NCAA.

Hellebuyck is proving that last season was not a fluke and he should be considered a potential future starter for the Winnipeg Jets.

Phillips has predominantly played the role of backup behind fellow sophomore goaltender for Michigan Tech Pheonix Copley. In January Phillips did play in 6 of Michigans 7 games after Copley was injured in the first period on January 3rd. Phillips had a strong showing in January, but Copley has since returned and taken back over the role as starter.

Note: Phillips split his draft season in the BCHL and the OJHL.

Copp has impressed many with keeping near the point per game pace that he had in the last quarter of 2012-13. He did benefit from an inflated shooting percentage earlier this season, but Copp has remained relevant both offensively and defensively for Michigan while the percentage has regressed.

Copp also played a major role for Team USA at the World Juniors. He was a point per game player with five assists in five games, and also placed 11 shots on goal.

Poolman is currently 3rd in the USHL for defensive points and first for goals. He has also grown into a leadership role for his team with being named captain. His shot production growth has been startling, starting in September with 1.5 shots per game and has moved up each month, with currently pacing 3.75 shots in February. The overage defensemen will be moving to the NCAA next season, where we can start to get a better handle on his development.

As a predominately Canadian fanbase, plus the CHL being the premier prospect league, there is a great level of difficulty in understanding what is and isn't successful production for USHL and NCAA. To help out, here are some graphs of Jets prospects at the same age to give an idea.

Click the image to expand to a larger size! 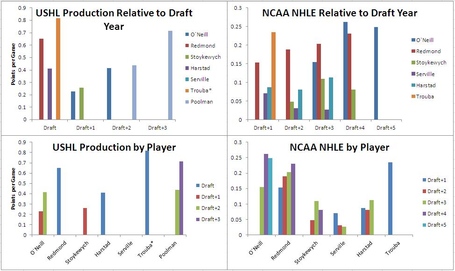 Left side is USHL defensemen, while right side is NCAA. Top is ordered relative to draft eligible season, while bottom is ordered by player. Note: Trouba is technically not an USHL player although the USNTDP plays against USHL team's a lot. 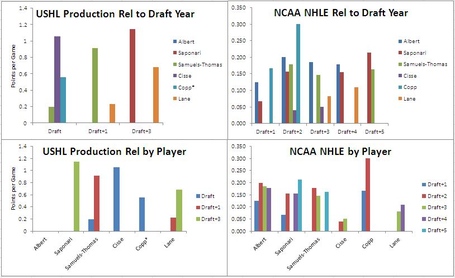 Same deal as before but forwards this time. Note: Cisse and Saponari are no longer Jets property but we need more data points to compare. Also, Saponari (and his brother) were removed from the Boston in his draft +3 year so he went and played in the USHL, until he returned to the NCAA the next year. Reminder: JST lost one year in the NCAA due to transfer rules and this graph does not contain this season for Samuels-Thomas.

Let us know who has impressed you!