Oh what a difference a month can make. The Jets are rocketing up the standings as they face the struggling Predators.

The Predators come into Winnipeg having lost two straight games to the Oilers and Flames, while the Jets are coming off a big win in Chicago; improving their record under Paul Maurice to 6-1.

Are you ready to drink the Kool Aid? 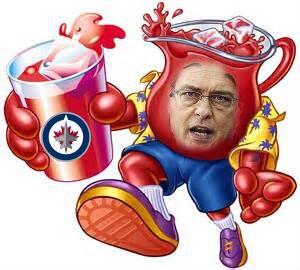 (Photoshop credit to the wonderful Melissa Martin of the Winnipeg Free Press. Follow her at @DoubleEmMartin)

What you need to know:

In honour of Rick Rypien the Jets will wear these jersey's in the warm up tonight.

**UPDATE! Evander Kane will be out until the Olympic break due to an infection in his hand**