Game Preview: Winnipeg Jets take on the Ducks in Anaheim

Share All sharing options for: Game Preview: Winnipeg Jets take on the Ducks in Anaheim

ALL ABOARD THE KANE TRAIN!

The Winnipeg Jets (22-23-5) will look to get back to .500 and remain undefeated in the Paul Maurice era as they travel to Anaheim to take on the Pacific Division leading Anaheim Ducks (37-9-5).

The Ducks will be motivated Tuesday night as they are coming off a rare loss that saw their 8 game winning streak come to an end. Despite the loss the Ducks have still managed to win 19 of their last 21 games and are looking to win their 11th straight game at home. Last time the Ducks played at home they beat the Canucks 9-1, this might be a tough night for the suddenly streaking Jets.

Hopefully the Jets will get a boost from the return of Evander Kane. Kane has missed the last four games for the Jets and will be lining up next to Mark Scheifele and Blake Wheeler. (Can I just say how nice it is to be able to name lines and not expect them to change 42 times throughout the night). Kane and Scheifele had shown some outstanding chemistry for a brief stretch before Kane got hurt again. Coming off a night that saw rookies Jacob Trouba and Scheifele combine for all three Jets goals, it would be an even brighter sign for the future if Scheifele and Kane can rekindle that magic they showed. In a season where playoff hopes are bleak, seeing our young pieces fit together is about the best case scenario we could ask for.

Tonight also marks the second last time Winnipeg will play against Teemu Selanne. Selanne has struggled to stay healthy this season and has only managed to score 7 goals and 10 assists. At the same time I'm pretty sure his first goal was against Jacques Plante. The longevity of his career is truly impressive and all along has been one of the classiest players to ever lace 'em up. I don't think there is anyone that could say a bad thing about him and I'm glad his final year is on a contending team. I can't imagine a more perfect ending to his career than raising a Stanley Cup. Hopefully the Jets can help that become a reality by giving the Ducks another wake up call and upsetting them at home.

The starting netminders have not been announced yet for this game. My gut feeling is that we will see Ondrej Pavelec again in net as the Jets have had plenty of time to rest. Paul Maurice seems to be trying to build up the confidence in Pavelec as he tries to evaluate exactly what he has to work with on this roster. 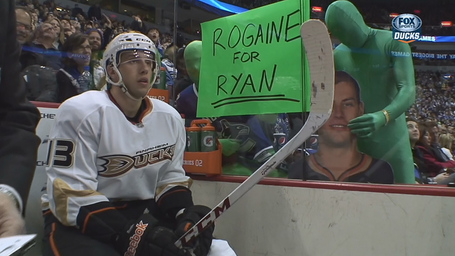