In need of a reshaping, does TNSE have what it takes to fix the Winnipeg Jets?

It's time for the Winnipeg Jets to change direction. Does TNSE have it in them?

Share All sharing options for: In need of a reshaping, does TNSE have what it takes to fix the Winnipeg Jets?

Pro hockey is a business… well sort of. Like the rest of pro sports, it flies under a different set of rules than other traditional businesses. Professional sports franchises are some of the only businesses in the world where owners inject hundreds of millions of dollars of capital into their venture and seem content to merely break even or make a modest profit. The development of the on-ice product is often left to the quasi religious "Hockey People" and the market is a fairly captive one. However, what if we were to treat the on ice product as though it were a real product going to market? And what if that market was basically the standings, with success being judged with wins and losses? What if we took the emotion out of the equation and tried to develop a team using business principles?

First of all, we all know why this article is being written: quite simply the Winnipeg Jets are failing to meet expectations, or in other words they're failing in the market. In this case the market isn't the paying fan, rather the market is the league itself, or our place in the standings. We quite literally are the 24th best product in a market-place where being the 12th best product is considered the minimum bar of success. The standings are actually our best friend, where other businesses pay large amounts of money for market metrics we have instant and definable results based on wins and losses. Our course is clear, but how do we alter it?

TNSE needs to come to the realization that the status quo isn't acceptable.

In other businesses the tried and true method of product development is the waterfall technique. Marketing submits a specification to engineering, engineering builds successive prototypes until they have a product they feel is good enough to bring to market and then the process starts again. This method creates a long and sometimes costly development life cycle (10 yrs for aerospace). A newer method called "lean" product development foregoes the prototype process and simply hypothesizes a product, builds a minimum spec and throws it out to the market place. If the market accepts the new product to any degree, feedback is solicited and an improved version is quickly re-delivered. This rapid delivery and response gets products to market quickly, but is also serves another function; if the product simply fails in the market it allows management to quickly pivot. The pivot is the process by where management comes to the realization the product is failing, and based on lessons learned re-invents the product on the fly.

The pivot is the hardest decision a business team has to make. It basically says you were wrong in most of your assumptions about the market and you have to go back to the drawing board. Although now as a result of the previous failure you're armed with new information about what the market wants and needs.

So by now dear reader you're wondering what the heck any of this has to do with the Winnipeg Jets?

In a very real sense constructing a hockey team has always been about lean product development. You put pieces on the ice and they either win more than they lose or they don't. You can change out your pieces on the fly and get almost instant feedback from the standings. The revisions to your product are constant and the feedback contentious. In any other business this would be a golden situation, you know exactly where you stand at all times.

The Winnipeg Jets need to pivot

There really is no doubt about this. The product has failed to reach its minimum objective in the market-place for two seasons and even though modifications have been made, the market has rejected the product. There are troubling signs that TNSE is having trouble either a) coming to the realization that they need to initiate the pivot, or b) that they are having difficulty processing the lessons learned from the initial failure.

TNSE, in my mind, has proven to be a fairly risk averse organization, which in a lot of areas is a very good thing. A methodical detail driven approach to business, with the minimization of risk is very much what you want to achieve, unfortunately that doesn't always translate to results when constructing a hockey team. This risk aversion may be what's delaying or preventing the pivot. Changing course dramatically may not be built into the organizations DNA and that may be to their detriment.

Even if TNSE has accepted the fact that their course needs to be altered, there may be some difficulty in determining what that change looks like and how to execute it. This by far is the biggest challenge in taking the next step to re-inventing the product on the ice. What will the new product look like? Will it involve roster changes? Will it involve coaching changes? Or will it mean sacrificing the quality of today's team to build a better one going forward? or possibly a mix of all three. It's an incredibly complex task with a lot of moving parts and a lot of very human personalities to deal with.

The time for a new coach is now 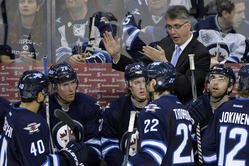 There have been darn near one billion takes on the woes of the Winnipeg Jets and system under coach Noel. Let's riff on that.

TNSE needs to come to the realization that the status quo isn't acceptable. Once they've done this they need to evaluate what's gone wrong, and what the quickest way to deliver a revised product to market might be. From the outside looking in none of us are truly qualified to offer a suggestion on how that might happen, but as close observers we are however qualified to say that the absence of action is no longer an option.

This team as it stands is a failed product that has been rejected by the market place, if by the market-place we mean ranking within the league. If no action is taken to re-invent the product and deliver something different this failure may spill outside the standings and into the consciousness of the fan base. If this happens, real dollars are at stake and the future of the product itself could be jeopardized.

A change is needed, it's time to pivot.