Just like there seemed to be no argument in the ranks regarding Evander Kane, the consensus number two in Arctic Ice Hockey's Top 25 Under 25 is none other than Zach Bogosian.

If you were to take a fan poll for favourite player in Winnipeg, it is likely you would find Zach Bogosian near -- if not at -- the top. Bogosian's combination of size, strength, tenacity and offensive skills makes him one of the more enjoyable players to watch. Add in an approachable demeanour and someone who is very positive and outspoken towards his NHL city and you have the perfect formula for popularity.

Saying that Zach Bogosian dominated junior would be an understatement. As a 16 year old rookie, Bogosian finished with 33 points in 67 games, second in team defensive scoring with only being outed by an over-aged player. He then topped off the season with being selected to the 2nd All-Rookie Team. Next, in Bogosian's draft season, he led his team with 61 points and finished just over a point per game. For context, the only current Jets' prospects to exceed a point per a game in their draft season are forwards and there are not many of them (Nicolas Petan, Eric O`Dell, Mark Scheifele and Jimmy Lodge in descending order). This resulted in being awarded 1st All-Star Team selection and being drafted by the Thrashers as 3rd overall, thus making him the first piece in the Atlanta Thrashers long rebuild which continued into the current construction of the Winnipeg Jets.

It is not all fairy tales and happy endings after here though. Early in his rookie NHL season, Zach suffered an injury, breaking his leg and taking him out of a chunk of the year. He did however recover, posting a pretty impressive point total while being sheltered as much as a terrible team could. Over the next two seasons things trended towards the worst. Bogosian injured his wrist and failed to disclose it to the team, choosing to play through. His point production fell dramatically and Zach started to become a liability on both ends of the ice. A moniker of Bog-oh-no started to follow him, as nothing seemed to go right when he was on the ice. Off-ice issues began to arise as well, with it being reported that Zach Bogosian was on non-speaking terms with his defensive coach.

Enter True North and Charlie Huddie. As the franchise moved to Winnipeg, Charlie Huddy -- newly acquired defensive coach -- took it upon himself to breakdown all of Zach Bogosian's tape and work on simplifying the blue liner's game. The returns came back in spades. Zach's defensive and offensive game became starkly improved and his offensive effectiveness returned to previous levels.

Here is a visual view looking at 5v5 points per a minute to paint an image of Bogosian's non-linear progression: 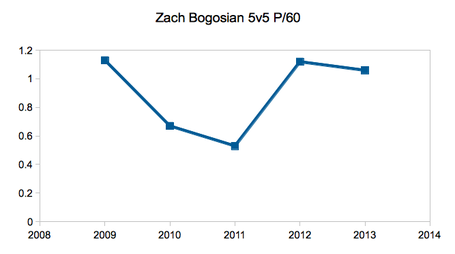 Those numbers above -- like all stats -- are meaningless without context. In 2009, Bogosian's 1.06 points per 60 minutes of 5v5 time was good for 21st place in the league for regular defensemen. He then proceeded to collapse to 153rd and then 186th the following years. Now points are not everything, but it is a good indication of Bogosian's success, especially since he was drafted as an "offensive defensemen who isn't a liability in his own end"... and you can ask former Atlanta Thrasher's fans, he wasn't getting the non-liability part right either.

But as stated earlier, this was eventually rectified and Bogosian recovered, turning himself into a fan favourite. So, just how good has his numbers been while in Winnipeg?

Over the last two season's Bogosian has had top 10 even strength production, with two of those better than him being on the very same team. A major part of defensemen's offensive contribution comes from the powerplay. In here we see Zach Bogosian stumble a bit to 60th place in the NHL for regulars. This would place him as a first/second pair tweener. While the Jets' powerplay is pretty dysfunctional and the sample space creates some issues with grabbing statistics from here, it hasn't stopped Tobias Enstrom and Dustin Byfuglien from being top performers here.

Of course, Zach Bogosian is not the sheltered type offensive defensemen, à la Marc-Andre Bergeron. In Winnipeg, Claude Noel moved Bogosian into a more defensive role, giving Zach the largest percentage of defensive zone starts after Ron Hainsey and continuously facing the toughest competition. Bogosian posting the offensive numbers he did in that role is already impressive.

But how did his two-way numbers fare? Well at a surface value they are not the prettiest, with him posting back-to-back negative Corsi and RelCorsi values. However, looking at the last season, Bogosian was 19th out of 51 defensemen who had less than 47.5% of their shifts start in the offensive zone and faced positive competition. Well let's take a look at how Bogosian lines up with the rest of Jets 2.0 defensemen if we level the playing usage playing field somewhat:

As you can see, ignoring the first few seconds after puck drop, the Jets direct more pucks towards the opponents net than their own when either Enstrom, Byfuglien or Bogosian was on the ice. Of course, we diminished the effects of zone starts and score effects but did not remove them. We also have not taken in account quality of competition and linemates.

So which linemates has Zach Bogosian had the best chemistry with:

Keep in mind that GF% (essentially +/-) is a measurement on what occurred, while CF% (+/- including all shot attempts) is a stronger predictor of what future would likely be.

Unfortunately for Zach Bogosian, two of his three best partners have left over the last two seasons, with Johnny Oduya traded and Ron Hainsey gone to free agency. The other best partner, Tobias Enstrom, will likely be paired predominately with Dustin Byfuglien (who share a unworldly 54.9% CF% when together). It is likely we see Grant Clitsome paired with Bogosian much of this season, unless someone moves to their offside.

Like the battle between Evander Kane and Andrew Ladd, Zach Bogosian doesn't seem quite ready to overthrow the player in front of him in the depth charts, but the gap is closing. He has turned his development around and is quickly becoming one of the better two-way defensemen in the NHL.

At only 23 years old Zach has become one of leagues best 5v5 offensive threats. If he can generate some solid chemistry with one of Grant Clitsome, Zach Redmond, Paul Postma or Jacob Trouba in the future the Jets may end with one of the better 1,2 pairs in the league.

<!-- ######## START FULL WITH FACEBOOK LIKE BOX SNIPPET ######## --> <!-- TIPS: 1. Replace <iframe> with your facebook page embed, otherwise it will use the default SB Nation FB page. 2. IMPORTANT: Be sure to remove the inline 'width' and 'height' attributes from <iframe> embed code. 3. IMPORTANT: In the event that you use your own code, be sure to make sure the border_color portion of the <iframe> looks exactly like this: border_color=%23ffffff&amp; -->
<div class="likebox-fullwidth"><iframe src="//www.facebook.com/plugins/likebox.php?href=http%3A%2F%2Fwww.facebook.com%2Farcticicehockey&amp;width=560&amp;height=185&amp;colorscheme=light&amp;show_faces=true&amp;show_border=false&amp;stream=false&amp;header=false" style="border:none; overflow:hidden;" allowtransparency="true" frameborder="0" scrolling="no"></iframe></div>
<!-- ######## END SNIPPET ######## -->