After completing his tenure in the OHL, Scheifele will be turning pro. So, where does Scheifele track and what should we expect of him?

Share All sharing options for: Mark Scheifele: Three Years of CHL, now what?

Winnipeg Jets 2.0 first ever draft selection Mark Scheifele recently received his second consecutive OHL Player of the Week nod, where he has gone 41 points in 21 games played. It has been quite the ride the last 3 years for the Kitchener native. Statistically he has developed quite well in the OHL.

The problem with relying on such statistical progression is determining how much is progression and how much is just dominating those who are younger. Over on the twitterverse, some Jets fans were making snappy retorts about how Scheifele's accomplishments mean very little when accounting for his age. This brought up the idea of trying to find some comparisons... Well here is every first round pick drafted out of the CHL as a centre that played both seasons in the CHL after their draft in the ten year period of 1997-2009:

All data was from hockeydb.com and input manually so there may be typo errors (if so, sorry) 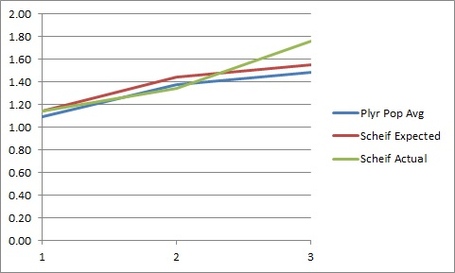 Truth be told, this doesn't clear up the debate, as it shows Mark could still end up anywhere from Kelman to Getzlaf, between or beyond. I heard it best said that Jets fans should be "cautiously optimistic" with Mark Scheifele's success. In the end it is NHL success that matters, but Jet fans do have reason to be optimistic with the future emergence of Mark Scheiefel and Jacob Trouba.
Now just to troll the haters: 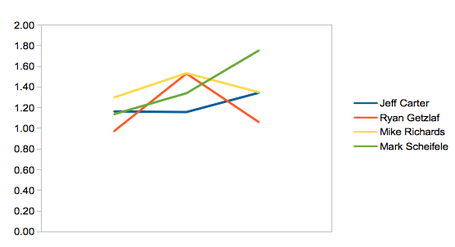