The Jets largely outplayed the Leafs but quite visibly shut it down when they took the lead. Check out the game story in picture form.

Here is the Fenwick timeline for the Winnipeg Jets vs Toronto Maple Leafs on Febuary 8th. 2013: 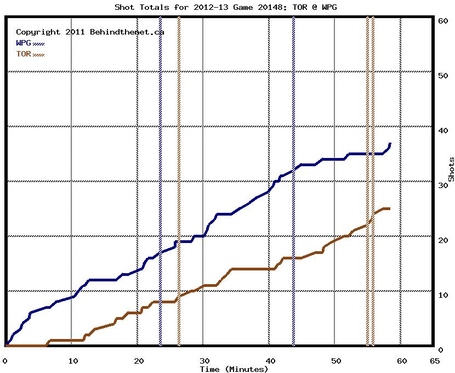 Leafing one on the table:

This is another chart that reflects exactly what we saw on the ice (or at least what I saw). The Jets dominated play early and carried it throughout the game. On paper this game had the makings of a whooping, until the Jets scored their 2nd goal. The immediate drop off is shocking though.

It really looks like the Jets tried to sit on a one goal lead and failed miserably. I don't know if this is 100% on them or if it is a result of the Leafs triple shifting Kessel and co, but this has to change.

On the bright side, the Jets have out-Fenwick'ed their opponent in each of their last 4 games, but only have one win to show for it. While this is extremely frustrating and somewhat unfortunate it is a positive sign for the future.

I know ten games isn't a huge sample size, but the Jets have out shot 6 of their opponents and they played Boston to a draw.

I really don't see a need to panic folks, but maybe that's just me.

If want to check out the Fenwick info player by player, Alex Hemsky made it available here.