Take a look at the Fenwick timelines for your Winnipeg Jets on their recent road swing through Florida. 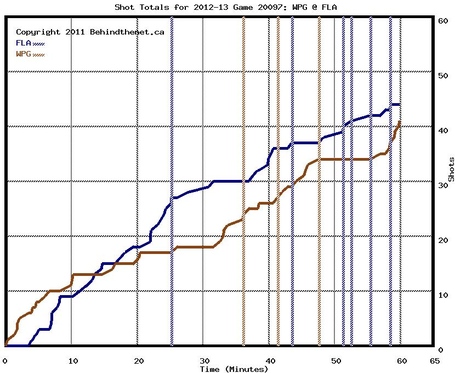 The Jets had a number of prolonged stretches (they show up as plateaus on the chart) without a Fenwick event. The plateaus should be expected to appear during a penalty kill, but the Jets actually had a couple plateaus on their powerplay. Truth be told, the powerplay issues worry me a little more long term that what is going on with the PK.

The biggest take home from this chart is how even things would have been if you removed the penalty kills. This is a game that the Jets could have won if not for penalties to captain Andrew Ladd and alternate captain Olli Jokinen. While I appreciate that the leadership group is willing to take their lumps and go down with the ship, I would prefer it if they didn't steer the ship towards the rocks. 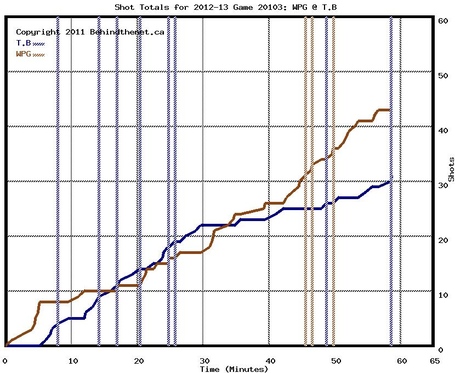 I am pretty sure a number of Jets fans took their suicide pills after this one, a few more probably should have instead of harassing Rick Ralph on the post game show. Pet Peeve: If you don't know the name of the player or what position he plays, you probably don't have the answer to the Jets penalty killing woes.

This was another game undone by special teams. The Jets started the game really really strong and took advantage of an early PP to build a large Fenwick cushion. Unfortunately for our guys shots don't equal goals and the Jets couldn't solve Anders Lindback and then the goals came...

A string of ugly penalties gave a talented Tampa team a ton of time to pick their shots and pot a few easy ones, but the Jets were never far behind Fenwick on this chart. Once again it is a closer game that the score would indicate. I wouldn't read too much into the Jets late surge as the game was well out of reach, but the fact that things were close through the early stages is encouraging.