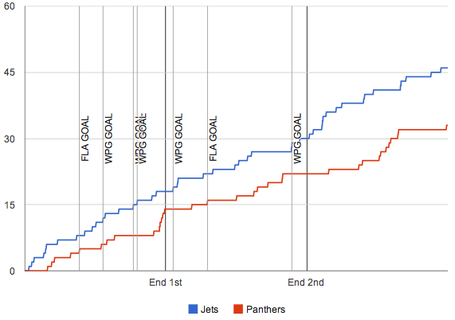 * LLW took the toughs so the Scheifele line could succeed against the soft underbelly, and succeed they did.

* Fourth line played some low event minutes... although not sure how Wright had so many marks in the "-" bin with barely any extra ice time.

* Jokinen line struggled a bit and, although Thorburn and Stuart can't be blamed for all of it, they had their fair share.

* I'm tough on Thorburn but he isn't at least Stuart bad...

* Speaking of which, Trouba did well consider the situation. He's not there yet in two-way play but the offense is there.

* Pardy did well with Byfuglien all things considering, but don't expect him to stay top 4 calibre player. Jets RHD depth is exceptional with Byfuglien, Bogosian and Trouba, plus Postma and Redmond on depth; however, they lack dearly on the leftside. Enstrom is a great top4 guy, but Ellerby and Clitsome are only good third pair options, Pardy is only a good depth option, and Stuart..... ya. Just one #4 capable LHD instead of Stuart and the Jets have solid defensive core.