Could the same roster had been used more effectively, create more wins, and in the end maybe squeak into the playoffs?

Share All sharing options for: Optimizing the Winnipeg Jets forward lines and why Corsi should be your hockey god

Let's face the facts; the Winnipeg Jets have not played very well. They currently sit 20th out of 30 in the league, 12th out of 14 in the west and 7th for dead last in the Central Division. It gets even worse when you look deeper, 23rd in regulation or overtime wins, 23rd in FenwickClose, 24th in CorsiClose, and one of the worst power plays in the league.

There is one caveat though; some of us think this same team could be better. Some have suspected effort, others leadership, while I personally find the largest factors to be a lack of proper efficiency, system and usage optimization. As the head coach, Claude Noel is in charge of many things and some parts in coaching are far beyond my abilities, knowledge or expertise. But, there is one thing I do know well, and that's using the on-ice results in being able to predict future outcomes.

The NHL arguably has more parity in the league than any other time previously known. There is a lot of chance in the game of hockey and it the margins of winning is so small it is not uncommon to see the lesser team win. In a league like this, the slightest improvements can have drastic long term results. No choice has small consequences.

We already previously discussed optimizing the second and third line in two articles, albeit in a vacuum. The major part of the evidence in the articles was in regards to Corsi% (the percentage of all shot attempts a team has relative to their opponent while a player is on the ice).

Some have difficulty with the concept of Corsi, because they are trying to rationalize "throwing the puck at the net equals wins" as what the statistic represents. This is a false representation. It is not that we care more about shots than goals, but rather we care about future goals more than past goals. (more on: the power and misconceptions of hockey analytics)

Of course, it is not as simple as better Corsi equals better player. Tyler Dellow's work on Corsi and Context displays some essential concepts to hockey analytics; he shows how a player's Corsi should be evaluated within context. He shows the individual impact different lines have. But most importantly, he shows how better Corsi players garner better results (Fig.1).

*via www.mc79hockey.com; open in new window to expand

Essentially, a better Corsi% player is more likely to help improve a team's goal differential. In addition, the actual relationship can be plotted between the two (Fig.2). Since Corsi% stabilizes to a degree quite early in a season, a linear regression analysis can then be used as a predictive model for expected goal differentials for each line. 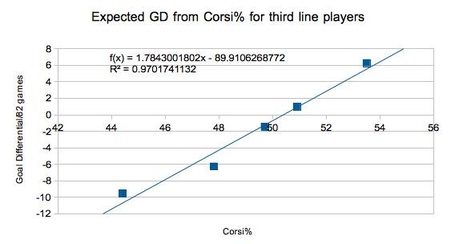 First we'll look at how the Jets have performed thus far this year. I included both Zone-Start Adjusted, Score-Close Corsi and scoring for 5v5. In addition, I added "Arby" which is just an algorithm previously constructed by myself, combining the two into one statistic (1/5th CD/60 + P/60).

* All data from stats.hockeyanalysis.com. No regression for shooting percentages, so players are getting a lucky boost up (Little) or down (Wheeler + Kane), depending on chance.

Using each line's Corsi% and the regression curves, the most reasonable end season goal differential would be for each line can be estimated.

Fig.4 Expected goal differential for each line based off of Corsi%

Seems reasonable with Jets currently on a -20 goal differential pace right now, although are only a -3 for 5v5.

Now for the fun part.

The optimal Jets configuration isn't too much different than the line up I placed above. In fact, all you do is switch Halischuk and Tangradi. However, it's a bit misleading because the line up above hasn't been used by Noel as often as some may think. For just one example: Wheeler has only spent two thirds of his total 5v5 ice time as part of LLW. This has implications as Wheeler (and both Little and Ladd) haven't performed apart as well as they do together.

As noted previously, Ladd's Little Wheeler is much better together than apart and have been apart far too often. Little's Corsi% with each of the two wingers by a TOI weighted average is about 52.2%. This small improvement improves the first lines expected goal differential to 5.47.

The second line has been a carousel of players with the most common player being Evander Kane, with the exception of injuries. Lately there have been some interesting opinions on Kane and this line, but I will stick to what the results stay. Jokinen and Setoguchi have formed some very good chemistry, while Kane --even with his very obvious flaws-- still is an effective player. If these players stay put and the carousel ends, we would expect a 54.6% Corsi. Being mostly used as a second line for minutes this extrapolates to an expected goal differential of 10.28.

This line is a bit more difficult to determine. Halischuk has been on the ice for 70% of the time that Scheifele has been with Frolik. In addition, Tangradi's sample size with Scheifele and Frolik is small, although not insignificant. We can expect that Halischuk is the anchor in the third line's shot metrics from multiple factors: Halischuk has a tendency to lower shot metrics, Frolik's numbers with with Scheifele is better than Frolik's with Halischuck, etc. It is also likely that Tangradi's >60% Corsi with either Scheifele or Frolik is unsustainably high. So, we used an average weighted by TOI between Frolik with Scheifele and Frolik with Tangradi to get a very rough estimate on how the line would perform, for a Corsi% of 44.7% and an expected goal differential of -10.10.

Now this is likely a gross under-exaggeration, as Halischuk is still representing a larger variable in the function than Tangradi, but better to shoot under than over. For those who are curious, if we use a normal average instead of weighted by TOI the Corsi% moves up to 51% and the expected goal differential to about +1.

These are simply the remaining three. It would take a lot more investigation to determine the other options, but we don't have significant sample sizes of players like Slater, Peluso, Cormier, Albert or O`Dell. Wright actually sustained much higher Corsi numbers while he was playing at centre, and to many peoples eye tests he seemed more effective. This is why we see a 55.4 Corsi% with these players together and an expected goal differential of -0.77.

Jets will never win with star power with the current roster but they can improve their chances of winning by placing players in the optimal places. Just these simple changes and we see a dramatic shift in results, enough to put Jets in a playoff position. This is not using hypotheticals but rather looking at how players have performed historically.

Corsi% is a powerful tool if you don't over think about it and understand contextual nuances. Understand its power and respect it.