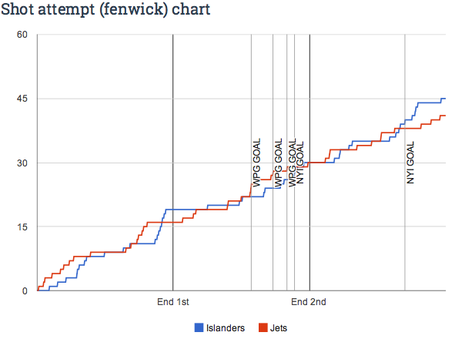 * These numbers have been semi-skewed from score effects. Most team's sit on leads near the end and you can totally see where the Jets did. So we'll discuss performance in ScoreClose situations (within 2 points in first and second period, or tied in third period).

* The Kane line + Enstrom-Byfuglien took on the Tavares line and mostly started in the defensive zone, and thanks to this LLW + Clitsome-Trouba got some very ripe and sweet minutes. LLW had around a 75% Corsi rating prior to Jets sitting on the lead and Clitsome-Trouba were not that far off.

* After pooping on Stuart, Mark responded with a solid game. He was a -1 Corsi, +0 Fenwick, +1 Shots and +2 Goals in ScoreClose situations... plus a goal!

* More games like this please, but without the defensive shell ending part. I understand risk management and am all for it, but don't sit back.