Shot metrics have been found to be pretty powerful evaluators of team and player strength. They are however far from perfect and contextual improvement is a major part of ongoing research in the statistical community. One weakness with Corsi and Fenwick percentage is it only shows final results. Movements like teams and players being on the down or upswing are missed.

In non-sport analytics, rolling averages are fairly commonplace in viewing and determining trends. We can use rolling averages with cumulative data to get a better view of how players are performing.

Due to some Claude Noel shuffling, both Mark Scheifele and Olli Jokinen have played significant minutes in the Jets top six, so we'll actually show seven players,

Open image in new window to view at larger size

* A lot of the Winnipeg Jets early struggles in the season seem to be connected to the Jets top six performing inadequately in that range. This has recently turned around for the better, and thus far we've seen a far more competitive Jets squad.

* Although they have not faced the toughest of assignments (these are raw unadjusted numbers) both Olli Jokinen and Devin Setoguchi have done pretty well since after game eight. Interestingly, game eight was where Setoguchi was a healthy scratch.

* Historically, Andrew Ladd, Bryan Little and Blake Wheeler have a combinative ability to linematch against the best under non-optimal situations and beat those tough minutes have been the Jets' biggest strength (well... that or Enstrom-Byfuglien). At first this didn't seem the case for the Jets this season, but fortunately it has been slowly turning for the better.

* Another interesting pattern is Kane's lowest point was right when he was injured. Evander Kane was on a down trend prior, and has been climbing out ever since the whole healthy-nonhealthy scratch controversy.

* Mark Scheifele has been suffering ever since demoted to the third line and away from budding star Evander Kane and he wasn't playing out of this world prior. His results are moving steadily downward and Jets will need three possession lines if they are going to compete in the Western Conference. It could be beneficial for Noel to surround Scheifele with Eric Tangradi and Michael Frolik.

Open image in new window to view at larger size

* It is really easy to see where the partners switched.

* Tobias Enstrom was playing well with Byfuglien, as usual, but not as well with Bogosian. At least he improved Bogosian to nearly positive.

* Zach Bogosian has been a disappointment to many fans this season. He seems to pull down his teammates more so than even Clitsome, and that's bad.

* Speaking of Grant Clitsome, after a terrible start in the season he has been much better, and the numbers seem to agree with the eye-test.

ExtraSkater.com has a cumulative Fenwick close graph, which we can use to look at team performance relative to our top players above. 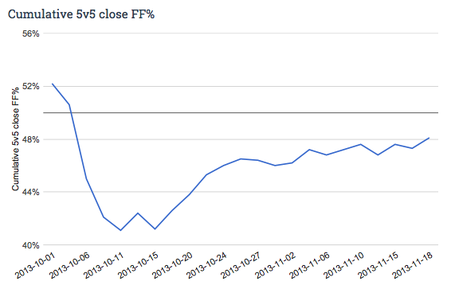 Let us know your thoughts and predictions down below