Share All sharing options for: Post-Game #FancyStats: Winnipeg Jets 3 vs Philadelphia Flyers 2 (SO) 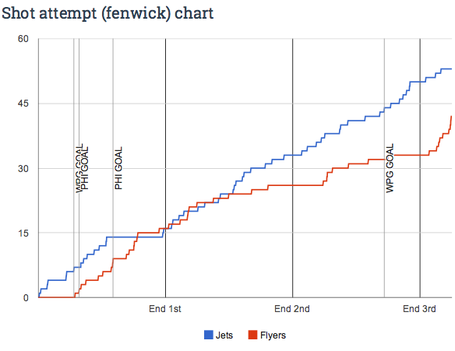 * Well that Fenwick timeline looks interesting AND it actually fits the narrative some were spewing about Jets falling asleep a bit.

* James Wright was the only Jets player who had a sub 50% night in all or any of the 3 shot metrics. He was doing so much better when he was first moved to centre...

* Lots of 5v5 minutes to Byfulgien and Enstrom is usually a good thing. The Jets still need Bogosian to get healthy soon. Well that or maybe this could be the return of Zach Redmond.

* When Zac Rinaldo was on the ice, the Flyers had 1 shot attempt and the Jets had 8... but I bet he was really intimidating.