Do you love trade rumours? Of course you do! Are you a Mean Girl? Of course you are! So here's an article about Evander Kane that covers all your bases. You go, Glen Coco!

At the heart of it, we're all Mean Girls.

I mean, think about it; does it get anymore gossipy, dramatic or cliquey than Winnipeg Jets' fans, or rather fans of hockey in general? It's no wonder that we collectively go bat-shit-crazy when any kind of trade discussion takes place during nationally broadcast intermission panels or emerge from the shadowy underbelly of a beat writer's Twitter account.

Which brings us to last night's speculation originating out of Montreal.

"If I was a betting man, this time next year, I don't think Evander is in Winnipeg." -Dennis Bernstein (The Fourth Period)

As previously reported by our pals at Habs Eyes on the Prize, Michel Villeneuve from the French sports radio station 98.5 Sports circulated an on-air rumour that Montreal Canadiens forward Max Pacioretty is about to be dealt for the aforementioned Evander Kane.

It should come as no surprise that Kane is a lightning rod for scuttlebutt and rubbernecking, as clearly evidenced by almost everything he's done since moving to Winnipeg in 2011. What can you say; his reputation supersedes him.

Now, I've gone to bat for Evander in the past, with mixed results ranging from agreement to audacious outrage. This time, I'm going to stick entirely to the cold, hard facts at hand so that you, gentle reader, can draw your own educated conclusion (read: I'm going to pump you so full of super, juicy gossip you can't help but join the frenzy).

Alleged boiling points between player and coach came to a head for the umpteenth time last week when Kane and Claude Noel each used local media outlets to spar over his omission from Winnipeg's line-up in a 4-1 road loss to the Chicago Blackhawks; a war of he-said-she-said which culminated in a frustrated Kane remarking:

"I don't know what [Noel's statement that Kane was held out due to injury] meant," he said. "The definition of a healthy scratch is a healthy player not playing so that was my interpretation, and it's pretty obvious that's what it was."

After Villeneuve stirred the pot with Habs fans, it was Winnipeg's turn to get in on the action.

Rick Ralph, host of the Rona Roundtable and all-around good guy had Dennis Bernstein of The Fourth Period on his broadcast this afternoon who -- though of the belief Kane's trade wouldn't be as imminent as Villeneuve stated -- painted a picture of a player on his way out with of town:

"I think teams like Montreal and Philadelphia have already inquired about Evander Kane. It would take a lot to extract him from the Jets, but, if I was a betting man, this time next year, I don't think Evander is in Winnipeg."

Now, it should be noted that neither Villeneuve nor Bernstein quoted any source or had any proof of a smoking gun to accredit or validate their claims. Nor is this the first time that Kane's name has cropped up in trade speculation in-and-around the time of a controversial incident. As mentioned, his reputation supersedes him. But it really makes no sense for the Jets to look at moving Kane at this point.

Do Claude Noel and Evander Kane have a communication problem? 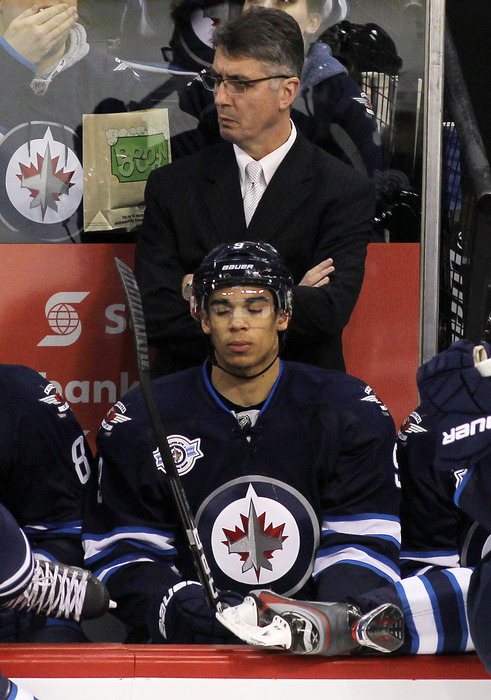 How frosty has their relationship become?

Cutting ties with a player you just signed to a five-year deal raises numerous red flags for any other player thinking of agreeing to a long-term contract in Winnipeg, be they restricted free-agents or otherwise. Unless your name is Gob Bluth, it's unsensical to say "I'm going to invest my future in you to the tune of $30 million dollars" only to moments later quip, "I've made a huge mistake." Evander is the same player he was two years ago when he accepted his extension. If there was any inkling of distrust in character, why anchor the franchise to a sinking vessel?

Right or wrong, Kane's penchant for bad press is supplying Kevin Cheveldayoff and the crew at True North Sports and Entertainment a laundry list of clichés to use should they decide to rid themselves of the distraction. Credit should be given to the management team for hanging in there are putting Kane in multiple situations to repair his image and for not taking the first offer to cross their desk.

Of course, in a salary cap world, Evander Kane will eventually be traded one day. Maybe not today, maybe not next year, but one day. However, to move arguably your most dynamic offensive player during a time where the Jets are trying desperately to build their brand and their culture, leads me to agree with Benstein that it would take an exponential offer to pry Kane away from the clutches of Cheveldayoff.

For now, all we can do is set back and let the purple-monkey-dishwasher continue. But of course, that was your plan all along. You all get gold stars.

Ed. Note: For an in-depth analysis as to why trading Evander Kane for Max Pacioretty is a bad idea, read Andrew Berkshire's work here.