Remember these? A quick look into the underlying numbers of the game.

Last time I did one of these was the last Jets shoot out win. 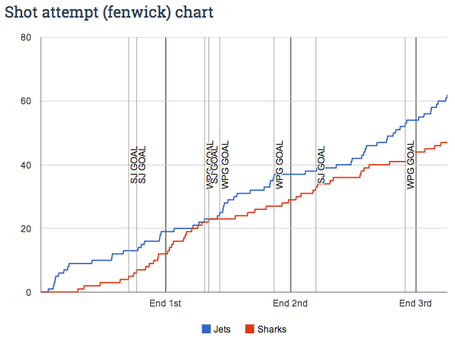 * Very back and forth game. Dangerous to do against one of the better teams in the league, but Jets were able to succeed.

* Jets won the scoring chance battle 17-12 after the third, although the chances were tied dead even for both 2nd and 3rd period.

* LLW being placed back together has them slowly climbing towards the positive shot metrics region, and the Jets' numbers are climbing with them.

* Should be noted that Tangradi, Ellerby and Pardy all have Corsi% about 10% above the team without them and are all hovering around 60% in close situations. This is about all you can ask and want for in bottom pieces.

* Jets need to be careful when playing against the best team for creating PP chances since 2010-11 season... but win is a win!