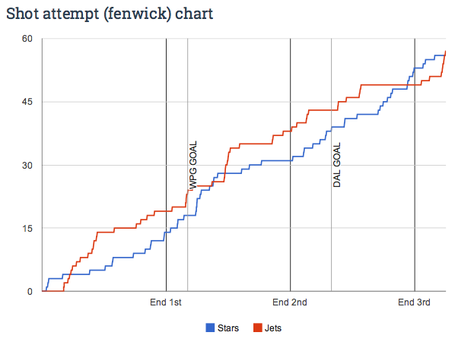 * Why Noel, why... Why sit on a tie like that in the third. It was so dangerous. I understand you don't want to be careless and loss the point, but ew.

* Not sure why Noel is using Clitsome-Byfuglien as the defensive zone specialists and pushing Enstrom-Bogosian into the offensive zone.

* James Wright looks pretty comfortable as a centre, and perhaps a lot more effective. It's only been a small look there, but we'll see.

* The last few games overall have been much more promising for the Jets, even though they haven't came away with the wins everytime.

* Not a fancy stat, but props to Pavelec for a good game. I don't know a single individual who would complain if Pavelec had more of those. I find it very interesting some like to raise the strawmans like saying those who think Pavelec has performed below average are: haters, wish ill on him, blame every goal against on him, etc. When all the "haters" come out and give him props for a good game, what does it mean about the rest of the games?