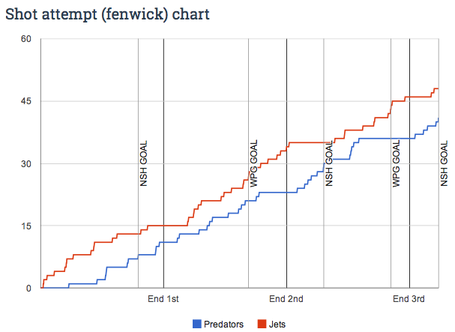 * I kind of would like to see Ladd-Little-Wheeler back together as I've noticed Ladd and Little miss Wheeler's zone entries. Problem is we all of sudden become the one line + Kane team then. So much for added depth.

* I misse Tobi-Buff. Why are they so scared of Clitsome-Bogosian? Just give all the tough minutes to Enstrom and Byfuglien. They'll take it and dominate. #sigh

* Stuart's a plus but from my eye and zone-exits, it seems like he was a rider and not driver of that possession.

* Above average save% would help too... or average... but I don't blame the loss on Ondrej Pavelec. I wouldn't say he stopped it either though.