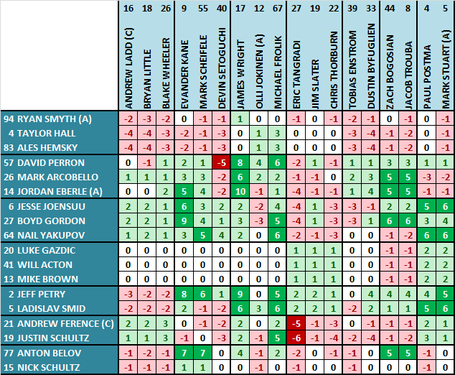 Note: this is taken with the Oilers view in mind, so reverse the pluses and minuses for the Winnipeg Jets. 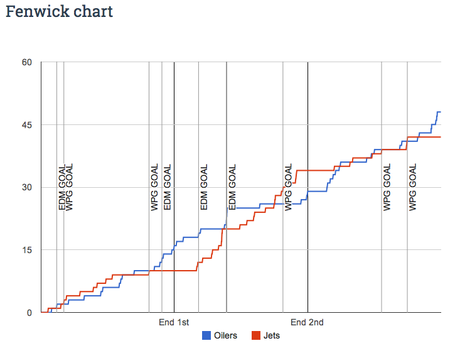 * As expected, Noel gave a huge offensive zone deployment push to the Evander Kane, Mark Scheifele and Devin Setoguchi line. This worked out as these guys were all pluses in the shot attempts departments.

* As expected, Noel gave a huge offensive zone deployment push to the Tobias Enstrom and Dustin Byfuglien line. This worked out (as usual) as these guys dominate together.

* Unlike usual, the line of Andrew Ladd, Bryan Little and Blake Wheeler were given a huge defensive zone deployment push, causing them to really work uphill. This allowed the Slater line to not be buried and actually come out ok.

* Unlike usual, the pair of Mark Stuart and Paul Postma were deployed as defensive zone specialists. This choice is a bit less odd, as Claude Noel may be trying to shelter a pair that is half a rookie and half a guy on his offside.

Note: Zone Entries and Zone Exits will be posted as a (somewhat) weekly basis but were tracked for the game... but as a little teaser: