* remember, PDO is just the shooting percentage and save percentage of the team while the player is on the ice 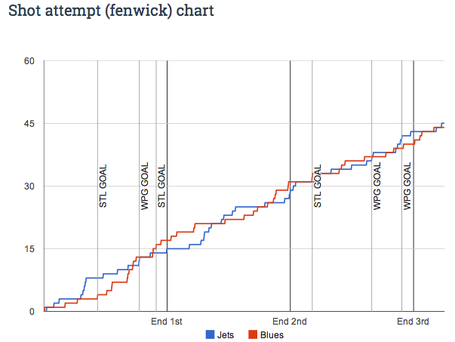 * It's amazing how perceptions can be manipulated by a few high-profile events. Many talked about the Jets usual "slow start"... yet I wasn't seeing it. I had missed the first period when I watched "as a fan" but got to view it when I re-watched the game for tracking zone entries and exits. My eyes went along more with the Fenwick graph, a very evenly matched game with breakdowns on both ends.

* Tobias Enstrom and Dustin Byfuglin are greater together than they are apart... the end.

* Olli Jokinen has silently been doing a lot better than the previous season, although hasn't received the recognition until the last game. He fits well on the third line. The second line however still seems to be missing something.

* Is it worrisome that Frolik's numbers haven't been in the black since he received more minutes? He was doing so well on the third line previously. Could Mark Scheifele be to blame or is it the added minutes and higher quality of competition levels?

* Speaking of Mark Scheifele.. is it worrisome that neither the Jets rookies have really been in the black? I know Mark Stuart isn't optimal partner for Jacob Trouba, but Mark Scheifele has been with quality players throughout the season.

* While the Jets did pretty good in zone entries, neutral zone play and directing pucks at the net, their zone exits were quite ugly, especially during the first period. Very few Jets players finished without at least one unforced possession loss in the defensive zone... and Grant Clitsome had a lot of them.

* I received a lot of twitter flack for defending Tobi two days ago. He comes out the next game as arguably one of the best players on the Jets, plus a goal. Enstrom is rarely flashy, so he takes a little more focus to notice the things he does, but it oh-so helps the Jets day-in-and-out.