We review how the players are doing throughout the season.

Every two weeks (or so), we'll look at the progression of our players and the team from an analytical viewpoint with the on ice results.

The season has barely begun and the Winnipeg Jets are only six games in. Even the fanciest of stats are not very indicative at this level of sample spacing... but, you have to start from somewhere.

We'll start with only a vary basic level, just skimming the surface, but look into things at a deeper level as the season progresses.

* Overall the Winnipeg Jets haven't been playing that well as a team, because of this they have been mostly starting their shifts from defensive zone and often been getting trapped.

* Erik Tangradi and Michael Frolik, all things considering, have done pretty well for bottom six pieces. Even Olli Jokinen has done well, although it could be Tangradi and Frolik boosting the line, too early to tell...

* Tobias Enstrom and Dustin Byfuglien have been the bright lights this season. Byfuglien has his moments, but when he's on, he can be an All-Star (see the game against New Jersey). Enstrom is probably one of the most underrated defensemen in the league.

* Andrew Ladd, Blake Wheeler and Bryan Little have not played to the level that we are accustomed to seeing. Let's hope that changes.

* Thus far the Jets second line has not played as well as the team or the fans were hoping they would.

* Add the two above points and you can understand why Claude Noel may done the right thing by shaking up the lines.

* Poor Jacob Trouba. Rookie getting the lowest OZS and always with either Zach Bogosian playing on his offside or Mark Stuart.

* These metrics are still in their infancy, so were not sure yet what level is good, what level is bad, and how much sample size is needed. Although, I hypothesize that it's around 100 puck touches for defensemen these numbers start regress near their true value.

* The defense turnover rate is pretty much in the order I would have hypothesized, although I'm guessing Grant Clitsome's numbers fall down a bit closer to Paul Postma's.

* You'll probably note that I am recording things a bit differently than last year, like combining all fails in one category and not tracking Corsi and goals arising from entries... mostly because I'm working on a project that takes more of my time from me. We still can grab some basic info here.

* Like the rest the sample size is petite but there are some things to grab. From my findings (and makes sense intuitively, since defensemen usually participate by being the passer or dumper) it seems that forwards skill affects success/fail rates for entries more than defensemen.

* I always prefered Eric Tangradi over James Wright because I suspected there would be a large difference in their successful zone entries, but even I am shocked at how extreme the gap is. I am hoping it isn't that I'm being bias in my scoring because this is huge difference.

* I've noticed that Blake Wheeler is dumping it a lot more often per attempt than last year, even when he has other options. Last year Andrew Ladd, Blake Wheeler, and Alexander Burmistrov liked to hook back and delay at the half-boards and wait for their linemates to catch up to them. I'm guessing Noel has something to do with this change (and someone noted to me a few yelling matches between the two after some zone entries by Wheeler), although currently this is just speculation. I just hate when it happens when there are other options: 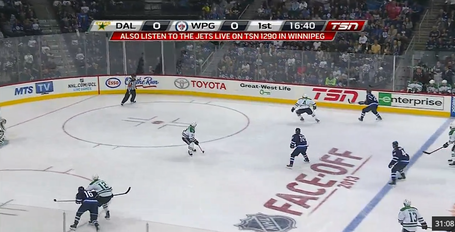 (this is actually after a successful carryin... which makes it all the more dumb...)

For score-close 5v5 game situations the Jets are currently:

This level of sample is not predictive of the future but should still be causing some alarms to flash. This team's puck possession is currently in the dumpster and things will need to improve.

However, it's not that surprising that the Jets are having possession problems after losing 2 of their top 3 possession players.

We'll probably start diving into these things more analytically once the sample size becomes more telling of what is actually going on (around 15-25 games played), but -- until then -- here's a great conversation topic.

Note: All entry and exit statistics are taking by myself personally and manually so there will be some scorer errors and bias. Hopefully as the year progresses though the outliers cancel out and we have a good idea of what's going on.