Oh boy! I've been looking forward to this one from the start haha. Look at the distribution of votes: from 14 to all the way to last spot (30).

James Wright is a defensive specialist who has a knack at reducing scoring chances against. As all fourth line players he is imperfect but when used appropriately and with the right pieces he can help a team out. The question remains though whether or not there are others who would be better overall.

James Wright begins his WHL career for the Vancouver Giants in 2006-07, placing in and out of the pressbox from the regular season all the way to the memorial cup. His points per game was decent for his age, placing at 21st for WHL players under 17 years old.

The next season his offensive production had a very slight increase but he was able to stay as a regular on the team for the season. He finished with five less points than rookie Evander Kane and just over half the points of former Jet Spencer Machacek.

Wright made the Tampa Bay Lightning opening day roster due to his defensive acumen and stuck with the team until December. Later realizing their error, the Lightning sent Wright back down to juniors in January, burning a year of James' ELC. When he returned he paced near a point per game for the first point of his junior career and scored 16 points in 16 games for the playoffs.

The next three seasons James Wright spent predominately in the AHL. Interestingly enough, his points per game decreased in all three seasons. In the third season he was placed on waivers after the lockout ended when failing to make Florida Panthers' team. The Winnipeg Jets organization, short on depth players, picked him up and he has stuck with the club since.

Not all bottom six players are alike

Eric Tangradi and James Wright have a lot of similarities. They are similarly aged, left wing, bottom six pieces for the Jets. They both currently have ten NHL career points. They both have been battling for the final spot on the third line. I even once saw someone say they are interchangeable pieces. Yet, in spite of all these things, one has been voted at eleven and the other at twenty three.

So, we'll have to defend this stance.

First there is their pre-NHL career point production. We'll compare their NHLE production since their draft season: 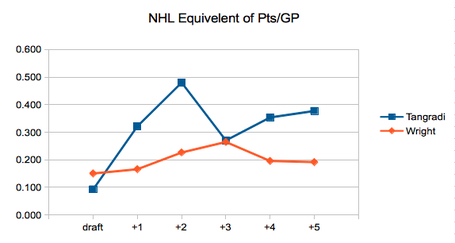 Then looking at their NHL career differences:

James Wright is a pretty good defensive player but the other parts of his game are lacking, relatively speaking. When Tangradi is on the ice, his team is able to take more shot attempts (noted by their CF/20) and spend more time in their oppositions zone (noted by their CF%). On top of this, Tangradi creates more offense for himself (noted by their iCorsi); while a difference could be expected if one was a shooter and the other a playmaker, Wright's individual Corsi is lower than even Kyle Wellwood. You don't take less shot attempts per min than Kyle Wellwood unless it's because the other team always has the puck.

Both are decent bottom 6 players, but Tangradi has shown effectiveness in pushing the play forward and out chancing his opponents. On top his production at lower levels suggest he has higher offensive upside than Wright.

The Wright stuff or not?

Wright started off the year in a battle with Tangradi for the 3rd line left wing spot, and it looks as though Tangradi has won that battle. Currently Wright is on the fourth line although Matt Halischuk, Anthony Peluso and Chris Thorburn will be challenging for his minutes.

<!-- ######## START FULL WITH FACEBOOK LIKE BOX SNIPPET ######## --> <!-- TIPS: 1. Replace <iframe> with your facebook page embed, otherwise it will use the default SB Nation FB page. 2. IMPORTANT: Be sure to remove the inline 'width' and 'height' attributes from <iframe> embed code. 3. IMPORTANT: In the event that you use your own code, be sure to make sure the border_color portion of the <iframe> looks exactly like this: border_color=%23ffffff&amp; -->