Game 6 of your Winnipeg Jets 2013 season vs Montreal represented as a pretty picture of nerd stats.

Here is the Fenwick timeline for the Winnipeg Jets @ the Montreal from January 29th. 2013: 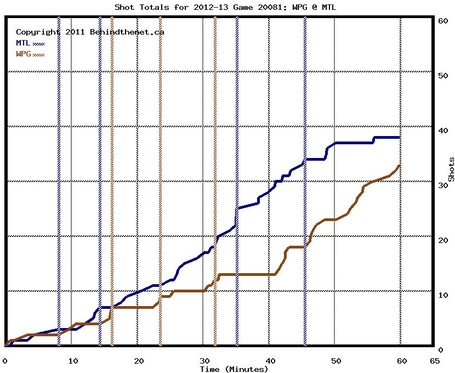 The Fenwick timeline seems to paint a very accurate picture of the game. Things started off fairly even, but the Canadiens really pulled away in the 2nd period. The Jets fought valiantly to even things up in the third, but they had simply given up too much ground.

Relative to the first 5 games, this was far and away the Jets worst offensive effort, but surprisingly the Jets allowed less Fenwick events against here that in any other game this season. Regardless, the Jets will have to put forth more consistent effort if they plan to win on a regular basis.

Statistically, Carey Price and Ondrej Pavelec were due some statistical regression, but that many goals on that few opportunities was kind of nutty.