The Winnipeg Jets have been winning, but should they be winning? Let's take a look at the team Fenwick data by game using super shiny pretty tables. 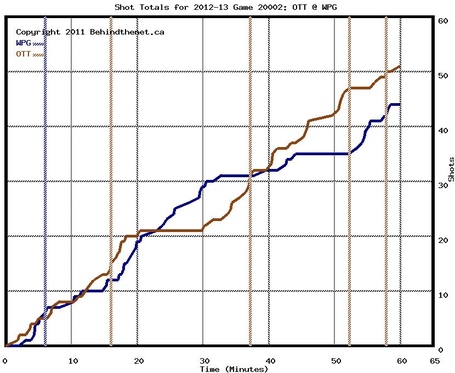 This was the Jets worst showing thus far, but as sloppy as the game was the Jets were playing the Senators pretty even through the first 2 periods. The third period melt down is apparent on this chart; the Sens pulled away both on the scoreboard and in Fenwick. 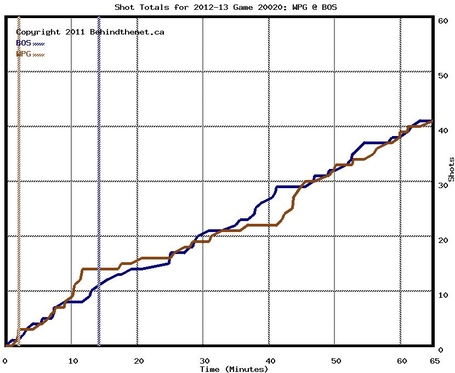 Back and Forth in Bean Town:

This came was a tight competitive low scoring affair and that shows up on this table too. Many will reference the quality of shots that Pavelec faced, but the fact is the Jets pushed just as many shots towards the Bruins's net and that's encouraging. It is also worth noting that the Jets generated fewer Fenwick events in this game than their other four games. 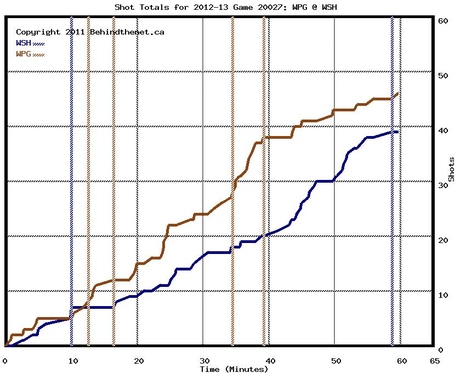 Getting Dirty in Wash:

This game was completely one sided and it shows clearly on this table. The Jets blew the Capitals right out of the water over the first two periods. The Jets clearly sat back a bit in the third and Washinton pulled a little closer, but the Jets lead was a lot to overcome. 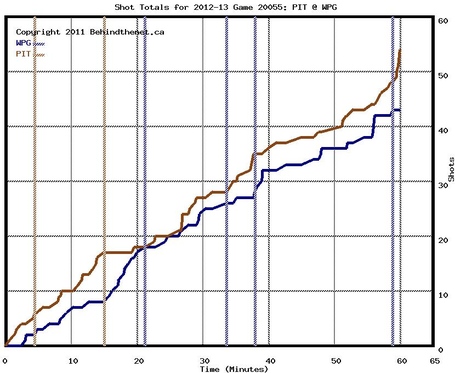 Puck Luck and the Pens:

This was another close game. The Jets weren't outclassed, by they did trail the Pens both in Fenwick and on the shot clock. The Jets did a great job of capitalizing on their chances and won a game that could have easily gone the other way. The Jets played a run and gun game and as a result they allowed more Fenwick events against here that in any other game. Wow! Did the Pens turn it up at the end or what? 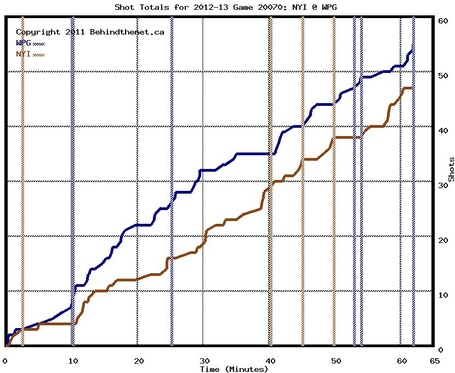 Win the Games That You Are Supposed to Win:

The Jets pulled away from the Islanders five minutes into the game and never looked back. Evgeni Nabokov stood on his head, so it took a while for the goals to catch up to the Fenwick, but in the end, the right team won. Of course there is nothing saying the goals have to catch up to the chances on a game by game basis, but over time they should. It was nice to see the Jets pull this one out.

The Jets have been doing pretty well from a Fenwick perspective save for an ugly third period vs Ottawa and a hard fought game vs the Pens. Of course it helps that the Jets have been in the plus with their PP/PK ratio. Hopefully our guys can continue to minimize their penalties and put forth strong efforts. It is still very early and I would be cautious about reading too much into any of these results, but it is nice to see that the Jets aren't lucking into all of these wins.

Montreal has been up and down thus far. The Habs played Toronto pretty even and out-Fenwicked (not a word) both Florida and New Jersey, but they were utterly destroyed by Washington despite coming out ahead on the score sheet.