Winnipeg Jets fans were pretty upset July 1, 2012 when, after stating his desire to return to the team, back-up goaltender Chris Mason inked a 1-year 1.25MM deal with the Nashville Predators. For Mason, his desire was to return to a familiar city in hopes of capturing a Stanley Cup which has eluded him the entirety of his career.

On July 4, 2012, TNSE had already found Mason's replacement, tendering a $601K one-year contract to Al Montoya, which he accepted.

During his time with the Phoenix Coyotes, New York Islanders and Hartford Wolfpack -- affiliate to the New York Rangers -- Montoya has had a bevy of stylish goalie masks which can be verified by a quick Google Images search.

Yesterday, In Goal Magazine released images of the goalie mask that Al Montoya will sport between the pipes, if and when a new Collective Bargaining Agreement between the NHL and NHLPA is reached.

From In Goal Magazine:

"The latest take on the franchise’s name comes courtesy of new Winnipeg backup Al Montoya and his long-time personal artist, Ray Bishop of Bishop Custom Designs, and it lives up to the high standards set by Jets goaltenders Ondrej Pavelec, Chris Mason and David Aebischer last season. Montoya’s new look features the tooth-filled mouth of a cartoon jet wrapped aggressively around the mask’s cage, with smoking exhaust pipes coming out the side, a Jets logo on the forehead between menacing (and sparking) eyes, and even some bullet holes mixed in with the rivets and metal of the plane below the chin." 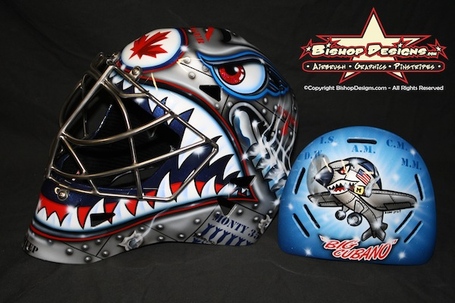 Image Courtesy of In Goal Magazine

How bad ass is that!? Ray Bishop does a fantastic job capturing the intimidating spirit of the fighter jet detailing it with blood red eyes and a set of sharp jagged teeth. The Royal Canadian Air Force logo on the nose of the plane is fine tribute to Canada's military men.

The mask also possesses some subtle detail work, evidenced by the smoking bullet holes in the chin area, the Monty 31 on the side of the mask, as well as the adornment of Montoya's "Big Cubano" nickname and the addition of familial initials on the back-plate.

All-in-all, this is a very strong design.

Ondrej Pavelec is set to debut a new mask of his own this season and will also don a continuation of the fighter jet motif.

So now we pass this along to you loyal readers: Who's mask do you prefer? Ondrej Pavelec's or Al Montoya's?

May the best mask win!