Share All sharing options for: Negotiating 101: Introduction to Trading, CBA-Style

Hey folks, welcome to part three of our crash course on negotiations. Part one, which you can read here, illustrated why most people are bad negotiators to begin with. Part two, found here, dealt with the fundamentals of negotiating - reservation points, BATNAs, opening offers, responding to offers, the strategy behind making concessions and more. If you understand those principles and adhere to them, you'll never lose a negotiation again.

In this part, we're going to get into a couple of the finer points: positions, interests, trading, and the like. In addition, since it's so timely (although I've waited a bit so as to remove emotion from the equation), we'll be using the current collective bargaining negotiations as examples. It's time to get your thinking caps on because lesson three starts after the jump.

One of the most important distinctions in a negotiation is understanding the difference between a party's stated positions and underlying interests. This is an important distinction because in many cases, a party's stated position may not be what they're really after or what that party really wants. Stated positions are often negotiable; underlying interests are often not. Take the NHL's current CBA offer as an example. From what we know, the NHL's current proposal would:

2. Require 10 seasons in the NHL before players become eligible for unrestricted free agency.

3. Limit contracts to a maximum of 5 years.

In addition, according to Larry Brooks of the New York Post, the proposal would eliminate signing bonuses and mandate the same salary in every season of a contract.

Now, these are the NHL's stated positions, but are they truly the league's underlying interests? Some might be, but for others it's unlikely. The NHL's main underlying interest is, more or less, to manage costs in order to keep as many teams as possible financially viable. While all or most of the points listed above are negotiable, that one point is probably not. Think about it for a minute: if an agreement could be reached where all of the NHL's 30 franchises were to become financially stable, do you really think that the league would care whether players would be playing under a 3 year ELC or a 5 year ELC? Would they care if players don't become UFAs until they've played 10 seasons? Unlikely, although some of these issues might actually be important to the league. The question then, is how to obtain more information about the other party's true interests in order to reach an integrative solution.

How to Get the Information Needed for a Good Deal

The key to succeeding at any negotiation is information. The more information you have - about yours and/or your opponent's reservation point, BATNA, tactics, true interests, anything really - the more likely you are to succeed. Negotiations are often secretive though, so how do you go about obtaining the information you need to reach a favorable agreement?

The better you are at probing and strategically divulging information, the more you'll be able to shift the conversation away from stated positions and towards each party's actual interests. In addition, you'll have more of an informational advantage and the more powerful your negotiating position will be. Knowledge is power, after all.

Distributive negotiations split up and apportion current value while integrative negotiations create new value for everyone. There are two key questions to ask in order to determine whether or not additional value can be created by trading:

If the answer to these questions is yes, additional value can be created. How? Once you have an idea about what the other party's really interested in, what the other party really covets and what you'll be able to trade away in exchange for something great in return, you can create value by trading low priority interests in exchange for higher priority interests. In addition, value can be created if you can:

The myth of the fixed pie negotiation prevents people from recognizing tradeoffs on compatible issues and leads to people devaluing the concessions offered by the other party. However, by negotiating integratively and trading to create value, you can reach a deal that results in a higher joint benefit and greater overall value than had you simply distributed a fixed pie. 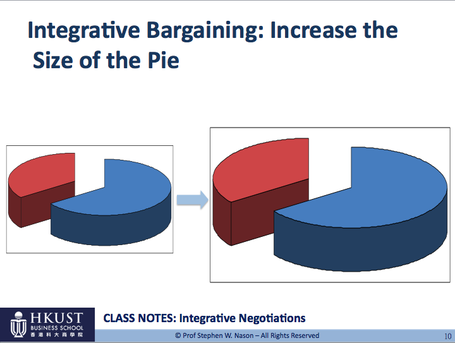 See what I did there? Just like that, I increased the overall size of the pie.

I'd like to explain one more trick, one of the easiest ways to continue creating value in a negotiation but for some reason it never seems to happen. In fact, I've often wondered why the major sports leagues and their players associations (or just unions in general) don't do this. What I'm talking about is a post-settlement settlement. What's that, you ask? Essentially, once a settlement has been reached, the parties re-open negotiations in order to try to come up with a better agreement. Negotiations are re-opened with an agreement that if either party does not like the result, they can revert back to the original agreement.

The reaction to the NHL's proposal has been sensationalist opinions calling the NHL's proposal a ________ (pick your cliché from the following list: "shot across the bow", "sign of hostility", "act of war", "sign of the apocalypse". However, if you'll allow me to take an unsensational, unemotional view for a minute, let's evaluate the proposal objectively.

Now let's objectively analyze the NHL's proposal. The NHL has created a number of issues, but only a few are important or even realistic, and only one is really important. Now do you see what the NHL's done with its initial proposal? The league has created several issues, most of which are important to the NHLPA but low priority for the league. The benefit is that now the league can trade a multitude of low priority issues in exchange for the few high priority issues that it actually cares about. The NHL's proposal isn't an act of war, it's just an excuse to trade. Now when the NHL gives up something it didn't particularly care about, the league can act like it made a concession and deserves a concession in return.

The only problem with that plan? It was plainly apparent.

Special thanks again to Dr. Stephen W. Nason for most of the information provided in this post as well as allowing me to use his materials.