The Pilot's Logbook officially closes with our "Team MVP," Ondrej Pavelec, who rode the wave of curious adoration and KHL paranoia to a shiny new 5-year deal with a cap hit of $3.9 million per year...all the while hiding a nasty little secret. We've spilled a lot of cyber ink talking about how much Pavs deserved in his next contract, how he was not "let down by his team" as some Pavelec defenders claim (regarding his save percentage), and in general if you want a glimpse of our disdain for the contract in thread form, look here. So, having pretty much vetted Pavelec the player, how do we take a look at a goaltender?

First of all, let me introduce you to a fascinating beta version of what I hope becomes a fully-functioning site: "ninja greg's" Super Shot Search. An example of Greg's marvelous work is the plot of Ondrej Pavelec's shots- and goals-against at even-strength in 2011-12 (repeated locations are darkened): 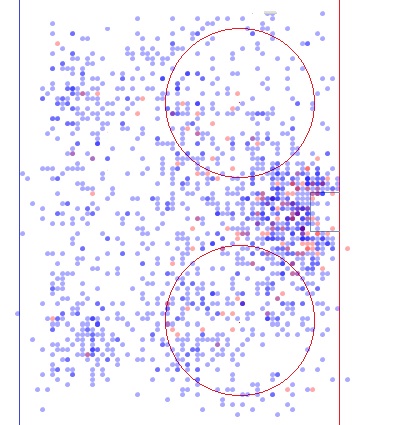 The league average save percentage at even-strength was 0.921 this past year, with the top save percentage among goaltenders with 25+ GP being Brian Elliott's 0.945 and the bottom being Dwayne Roloson's 0.897. Pavelec's 0.917, a below-average mark, came in 31st of the 45 eligible goaltenders. Lest you think Pavs scatter plot looks like he encountered a lot of close shots, and should therefore be excused, here's Henrik Lundqvist 's plot at even-strength: 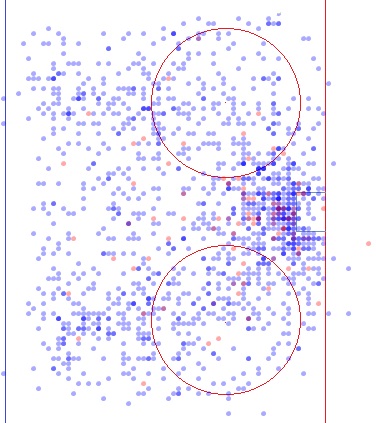 If anything, the shots are even more intensely located close to the net for Lundqvist, yet he didn't seem to have too much trouble posting a 0.933 save percentage at evens. Look at any other goaltender on Greg's site and you'll see that most goaltenders at evens had very similar plots, which is also another reason why most stats folk consider "shot quality" to have a minimal effect against teams (and thus shouldn't be an excuse for a poor save percentage).

Furthermore, the fact that the percentage of Pavelec's time on the kill came in 22nd among NHL goaltenders with 25+ GP (there were 48 total in 2011-12), and that the team in front of him performed 20th best (of the 48) Fenwick-wise in front of him (nevermind that the Jets came in 10th in the NHL for lowest shots-against at 5v5), suggests that the team was not the central problem nor root cause of Pavelec's woes.

Flashy saves, but a very, almost scarily, below-average season from Pavelec. With few acceptable excuses, he needs to just pick up the pieces and try to bounce back this coming year. We cannot have another replacement-level season in our net.

The trick with replacement-level goaltending is that it's considerably easier to replace than other positions. The NHL has now maintained the same size for over a decade, which has eventually brought the performances of average NHL goaltenders and their AHL replacements closer together than ever before. Even at a $1.15m cap hit (as Pavs was last season), we could have saved a cool $500K if we had found an AHL goaltender to come in and give us a 0.906 save percentage. That kind of move, of course, would be a fictional, armchair GM kind of move, but I'm more interested in using it to illustrate why we weren't saving even though Pavs contract was pretty low.