Ron Hainsey, in a nutshell, has had a mercurial career, beginning with the initial disappointment of not panning out for the team that drafted him in the 1st round (Montreal Canadiens, 13th overall in 2000). Claimed off waivers by the Columbus Blue Jackets, he transformed into a solid two-way defender in Ohio, though his exploits as a powerplay quarterback received the most attention. Buoyed by success, Hainsey and his agent were able to negotiate a pricey, $4.5 million cap hit per annum contract with the Atlanta Thrashers during the 2008 offseason, and though he once again turned in strong offensive numbers in 2008-09, in subsequent years his offence dropped off noticeably (powerplay TOI should take the primary blame: 2008-09 5v4 TOI/60: 3.45, 2009-10: 1.19, 2010-11: 0.46, 2011-12: 0.72). In its place was an increased reliance on Hainsey's defence, a decision that now seems to be a bit misguided. Yes, Hainsey is a capable two-way player, but he's not particularly good when leaned on defensively.

Of course, we leaned on him defensively last year, soooo....

Hainsey seemed out-of-place in the pairings last season, even though logic dictated that he was probably best paired with Zach Bogosian, kept out of major PK minutes, and given some time on the powerplay. An injury drove a wedge into his season, but really he wasn't noticeably different pre- and post-injury. 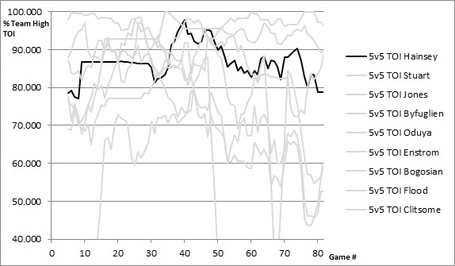 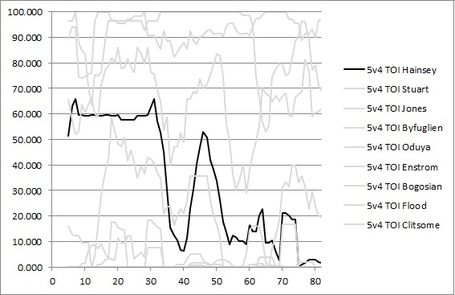 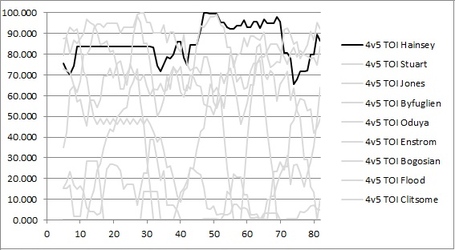 Those straight lines are taking liberty with the loss of time to injury...using the TOIs around the time of injury and upon return to estimate where he'd be. In whatever situation, Hainsey moved into Johnny Oduya's PK minutes, and lost PP minutes in the process. 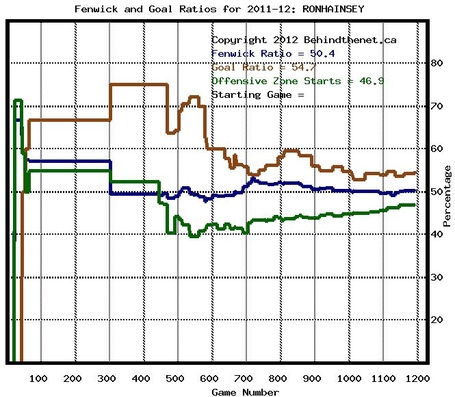 It's not an overwhelmingly flattering portrayal, but the last graph at least alludes to Hainsey's capabilities on the two-way front. He might need to be a bit sheltered, and he might need to get some PP minutes, but I don't think he's past the talent that brought him three consecutive 32+ point seasons and sound two-way play.

It's not so much a condemnation on Hainsey the player, but the previous and present coaches that decided that his value was in getting tough defensive minutes and leaving the juicy minutes to primarily two defencemen (Tobias Enstrom, Dustin Byfuglien). Toby, in particular, could help us by taking some defensive minutes. Regardless, as it stands Hainsey will not look good (nor be done justly) via these kinds of minutes.

Look, as the last chart suggests, he's got the possibility of being an effective player. But his performance last year, and that $4.5 million cap hit, just don't go together.