Finally, we come to the last skater in the logbook, Mark Flood. A defenceman who only graced us with his presence for 33 games, he nevertheless left an indelible impression on a number of minds (especially in the Winnipeg media). As nice as it was to see him do some positive things offensively, he played a poor possession game and the indications were that he was aided by favorable percentages that were bound to regress (for instance, 10.0% shooting is nearly double the average shooting percentage for defencemen).

Pretty standard replacement-defender use, though the 5v4 usage seems a little high when you have Zach Bogosian and Dustin Byfuglien in the fold for the right side. He got a little bit of use at 4v5 too, but that's more understandable considering our dearth of defensive defencemen (not that Flood is one, but I digress). 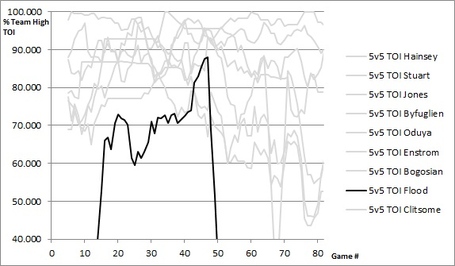 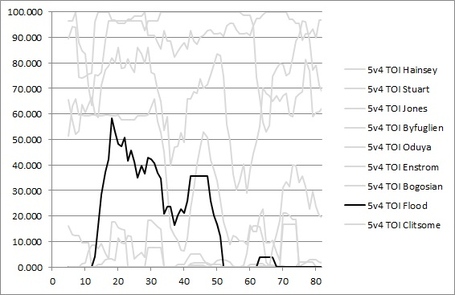 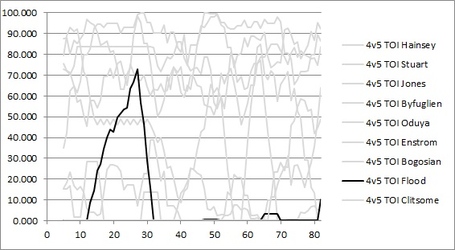 He was never altogether trusted at 5v5, but he was curiously included in the bottom pairing on both the kill and the powerplay. The end result were some juicy opportunities to look good to Winnipeg fans and media, and he was fortunate enough to put some pucks in. 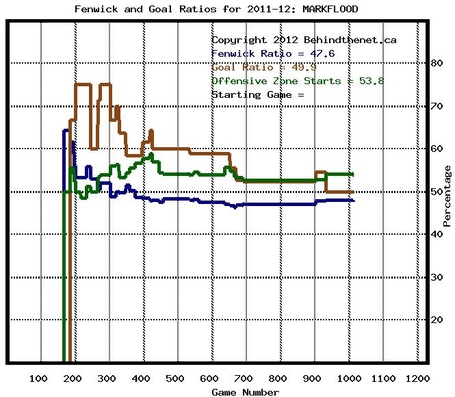 And there's your cold, hard truth. Juicy starts, mediocre possession. Don't get me wrong; Flood could do a great job as an AHL defender, but he's just not playing well at the NHL level.

The scoring in limited time is a result that can't be entirely discounted...they happened. But otherwise, Flood had juicy minutes and didn't play very good hockey. Considering we have a guy like Paul Postma available to call up and possibly do some good things with those minutes, I'd rather he didn't step in the way of that.

At $525K, he was in on a league minimum contract and he didn't really play that well. So I guess that fits, but it also offers zero value to us.