The freshest face in the logbook, Grant Clitsome was claimed off waivers by the Winnipeg Jets in late February, presumably to add depth as Johnny Oduya was traded the same day. Clitsome arrived with a mixed history, punctuated by some promising boxcars and fluctuating percentages. That said, he looked fairly solid in his 12 games for Winnipeg, and it's a distinct possibility that, as a lefty shot, he holds as our 3rd pairing defenceman going into the season, with Ron Hainsey taking the 2nd pairing spot alongside Zach Bogosian, though there is also Mark Stuart (another lefty shot) to consider.

Pretty straightforward: Clitsome is an offensive defenceman, and given the reluctance of Noel to give 5v4 minutes to Hainsey there's a distinct possibility he ends up as a 2nd pairing defender on the powerplay. If not, it'll be because we've decided to place a forward there; I've heard rumours that Olli Jokinen was used in that capacity with the Calgary Flames. 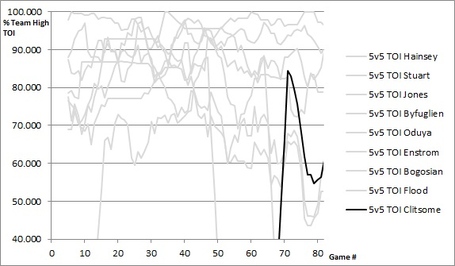 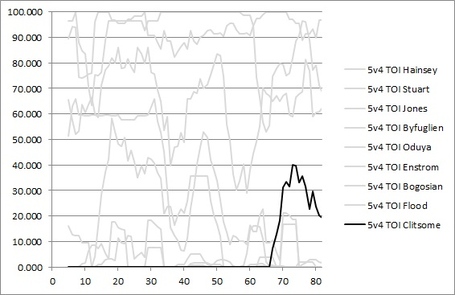 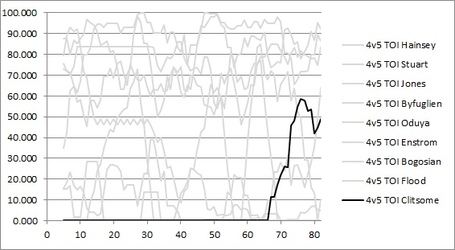 I'm not really sure what the 4v5 minutes were all about, though in his defence Clitsome did pretty well in limited PK action. Maybe this is a realistic role for him...really, it's not the best place for Hainsey, and Clitsome will be in competition with Stuart for the 3rd pairing spot, so the pressure will be on for him. I think it's worth a try, especially since Stuart hasn't been all that impressive on the kill. 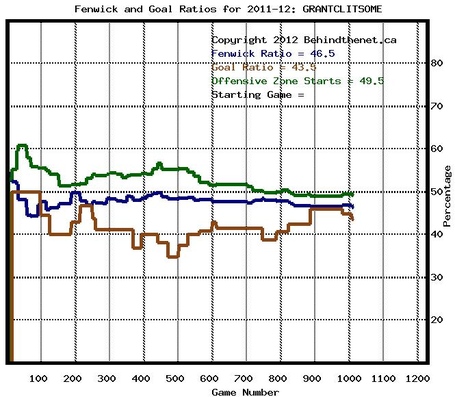 This last graph kind of lends to the assertion that Clitsome doesn't really belong above the 3rd pairing. He's yielded slightly better returns in 2010-11 and 2009-10, but those samples are too small to be given primacy in this analysis.

He really hasn't played enough to get a high grade, but the 4v5 play is a reason for slight optimism.

Whenever you look at the performance of a player who has a cap hit over $1m, you have to consider the value that's only a call-up away, since it is anywhere from 150K to a couple of million dollars in savings cap-wise. Do I think the 28-year old Clitsome, at a $1.25m cap hit, was considerably better than what Arturs Kulda could have done in his spot? No, probably not. And just like that, you go from paying $575K for a defensive-minded 3rd pairing 23-year old to Clitsome at nearly $700K more. I've seen my fellow AIH writers suggest that Brett Festerling could be another more-favorable alternative, but now he's off to the Motherland. Either way, it's something to think about when analyzing getting the most value out of your assets, even at the bottom lines and pairings.