There are still critics that note that Zach Bogosian was undeserving of the 3rd overall pick in 2008, and it's hard to argue when Alex Pietrangelo was selected immediately after him, and Erik Karlsson later in the 1st round. That said, Bogosian's learning curve has been slow-but-nonetheless steady, and unlike the other two he had the misfortune of being rushed into an expanded role right out of the gates. Favorable puck luck helped him look pretty good in 2008-09, but in truth he was overmatched and still learning the NHL game on a defensively-questionable team that year through 2010-11. Under Noel, though, Bogosian seems to have finally found someone who understands his strengths and plays to them; of all our defenceman, I think Bogo and Buff are the two who were the most efficiently used in their strengths. The added bonus were the flashes of some offensive upside, which suggest that Bogo could eventually become a solid every-minute defender for the Jets.

When you put all those elements together, you can't help but feel like Bogosian is finally realizing his potential. Sometimes, breakouts like Michael Del Zotto's can be deceptive; a 30-point season early in a player's career can set the tone for many years of boxcar accolades but questionable play in a defenceman's own zone. Thankfully for the Rangers, Del Zotto seems to have settled down, but I'd much rather that our defenders demonstrate their capabilities as a defensive player first (a la Victor Hedman, Adam Larsson). That kind of know-how will remain even after their peak years. 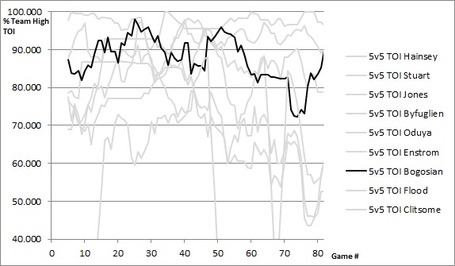 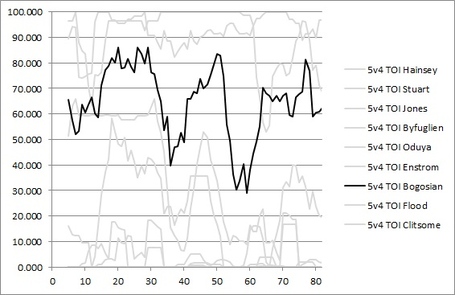 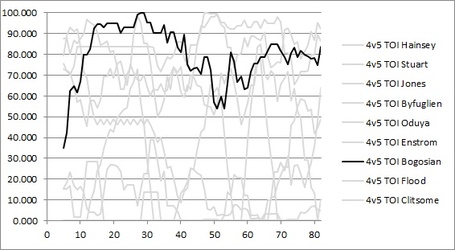 The 5v4 minutes are still a bit spotty, so I'm a little nervous at the prospect of what happens when Paul Postma enters the mix. I think Bogosian can be pretty good offensively, but if he doesn't get those minutes we won't see the payout. During the playoff push, Bogo's 5v5 minutes dipped a little bit, but that'll happen when you're behind a pairing like Dustin Byfuglien and Tobias Enstrom. 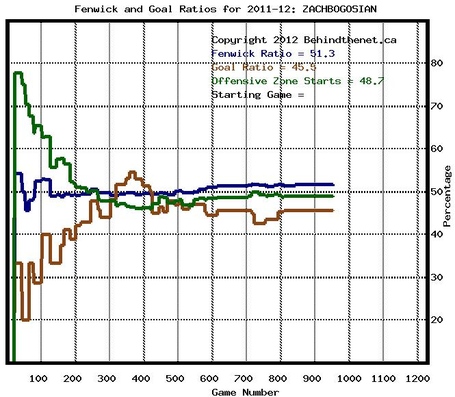 In 2011-12, the Jets began to lean a little more on Bogosian, and he responded with solid possession numbers despite a revolving door of linemates. Maybe if we had seriously groomed Arturs Kulda instead of signing Randy Jones, Kulda might have been ready to form a shutdown pairing with Bogo this year, with Bogo getting PP minutes as well. I like Ron Hainsey with Bogo, but I don't envision Hainsey as being an ideal partner if Bogo's pairing will be used to shut down opponents.

You want a little more category juice from a guy who had the 3rd-most 5v4 minutes, but otherwise 2011-12 was a very underrated season from Bogo.

This is precisely why you don't rush 1st round draft picks. At a $2.5m cap hit, we got very good value from Bogosian, but can you imagine the returns if 2010-11 had been his first season in the league? 2011-12 and this coming season would have both cost us $1.6m less in cap. Regardless, now after 2012-13 he reaches RFA status (again), so by the end of next year the "savings years" will likely end.