Randy Jones, or better known in these circles as Ran_y Jones (as in, there's no 'D' with Jones), was a much-reviled figure among people who were watching the games (as we're often accused of not doing, incidentally). Our game threads were frequently filled with Jones-related epithets.

Truthfully, I was optimistic about the Jones signing initially, thinking he'd make a nice fourth defenceman on the powerplay and fine on the third pairing. Let's see how that played out...

Okay, 5v5 time, check, 5v4 time, nil but okay, fine...check, 4v5 time, ch...wait. Okay, so Jones had played a lot of 4v5 time the previous season with the Tampa Bay Lightning, but he and the Lightning's PK performances were dismal at best (Jones was near the bottom among TB defence w/1+ 4v5 minutes per 60; the Lightning were 25th in the league in SA/60). In his previous season with the Los Angeles Kings, the Kings wouldn't even let him sniff PK time. He wasn't particularly good on the PK in 2008-09 nor 2007-08 with the Philadelphia Flyers, either. 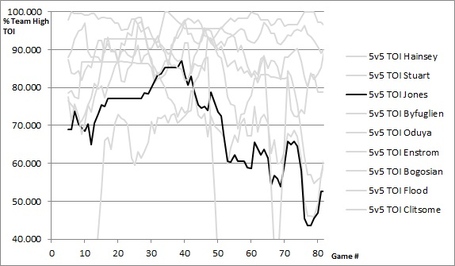 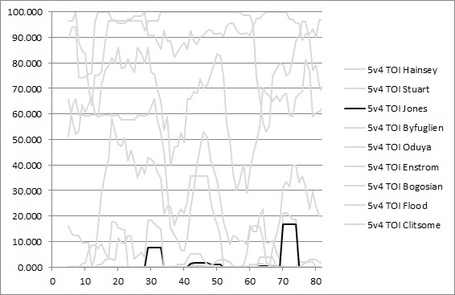 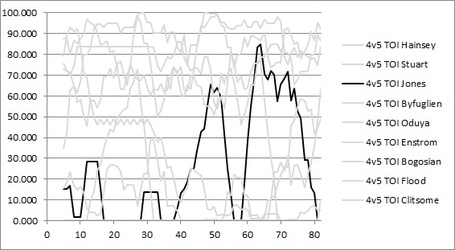 These charts tell conflicting stories; on the one hand, Noel didn't seem too thrilled in giving him 5v5 minutes as the season went along, but he didn't seem to mind throwing him out there in 4v5 minutes. Ironically, I could've seen the justification in giving him 4v5 minutes when Tobias Enstrom went down with his shoulder injury, but that's definitely not what happened here. 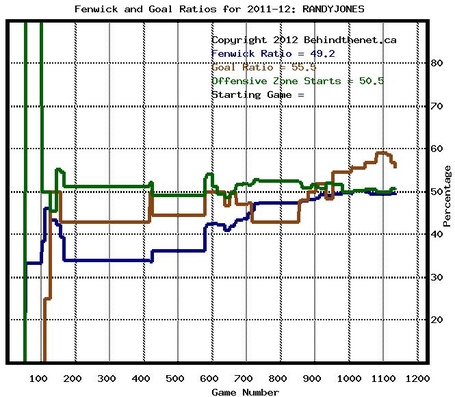 Yeah, not good, and that's even without being leaned on much for zone starts. He got steadier as the season progressed and he got fewer minutes, which coincided with getting slightly more favorable zone starts.

If there's something redeeming here, I don't see it. Maybe if he had been given extraordinarily soft minutes and powerplay time, but at that level of pandering shouldn't you give that kind of time to a younger player with upside...say Arturs Kulda or Paul Postma?

Even at a $1.15m cap hit, it wasn't worth it. I can think of a whole slew of defencemen who could've done the same or better for less: Derek Meech, Brett Festerling, Arturs Kulda, Zach Redmond, maybe even Mark Flood.