Ah, Toby. Love of my life. Okay, not really, but it stands to be said that I have loads of respect for Enstrom as a hockey player. In this day and age, few small defencemen have been able to demonstrate the ability to play in all situations, but Toby is definitely one of them. This past season, the Winnipeg Jets were dealt a crushing blow in the early months when Enstrom went down with a broken collarbone, and it's no surprise that their strong December coincided with his return. Toby certainly was part of the remarkable improvement team-wide that we saw beginning in late November and carrying through December. Even when the scoring well went dry in January, we were still a better team with Enstrom in the fold.

And that's partly because he's destined for all eternity to live inside Dustin Byfuglien's left front pocket, as the steady counterpart for Big Buff when he decides to be adventurous.

Obviously still a second fiddle to Buff, Toby actually offers a comparable overall value because of his better Corsi Rel at 5v5 (14.5 to Buff's 13.1) and strong 4v5 play (by SA/60, he was essentially our 2nd best PK'er, behind Zach Bogosian). Considering our lack of true defensive defencemen, I would not be opposed to shifting some more PK minutes his way (having Bogo and Toby as our top PK pairing, for instance). 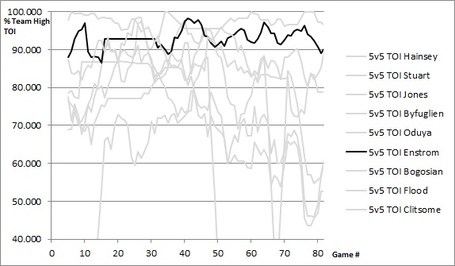 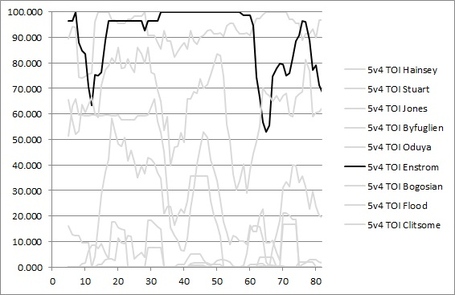 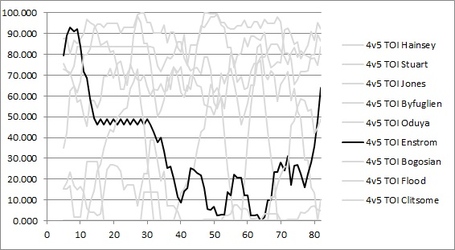 While the 5v5 stays fairly steady, there were some noticeable drop-offs in 5v4 and 4v5 time. It's possible that this was due to concern over his injury recovery. It really would be nice to know that Noel doesn't plan on dropping him off of 4v5 minutes altogether, though. 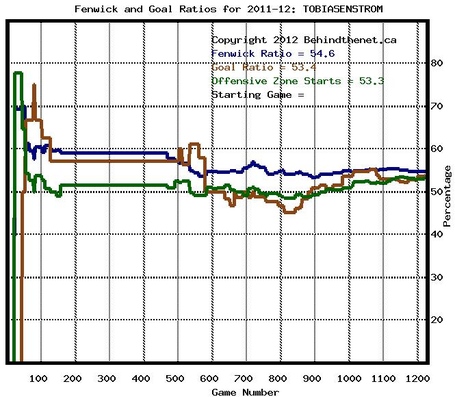 Even without extraordinarily favorable zone starts, Enstrom plays a plus game. Give the guy 3 inches, 13 more pounds, and an every-minute spot on the Detroit Red Wings and you'd darn near have yourself Nicklas Lidstrom circa 2008. Compare the results of the above chart to Lidstrom's 2008-09, 2009-10, and 2010-11.

He's doing exactly what you want him to do in his minutes, playing a strong possession game, reducing his own dumb penalties, and helping put points on the board (he was on-pace for 44 points in 82 games last year, even though he wasn't 100% throughout). I really cringe whenever the talk turns to Toby being expendable; for one, our depth on the left side is meager, and it really isn't so simple as teaching a defenceman to play the opposite hand. For two, it is very hard to purposely acquire or develop a talent like Enstrom, so the idea that he could be replaced is overly optimistic. Still 27 years old and going into his age-28 season, the conversation really needs to turn towards re-signing him.