One-part of the famed "Boogie with Stu" pairing, Mark Stuart was a holdover from the Atlanta Thrashers that saw increased usage for the Winnipeg Jets. His big hits and shot-blocking drew a lot of press, but since statistically-speaking neither hits nor shot-blocking are net positive activities, I had a healthy dose of skepticism that his underlying numbers would be impressive.

From a very basic standpoint, that explains some of the shot-blocking right there: he was used quite a bit on the PK. In general, Stuart was noticeably lower on the food chain than Ron Hainsey (nearly 3 minutes behind in 5v5 TOI, though he was directly behind him in rank), and probably deserving of such placement

Though a 1st round pick by the Boston Bruins in the fabled 2003 NHL Draft, he is widely held as one of the busts, never really developing into anything beyond a 3rd-pairing defenceman. 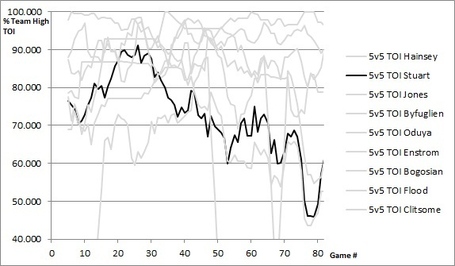 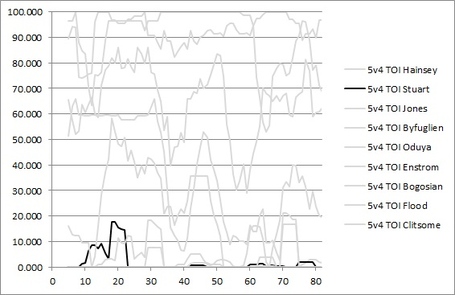 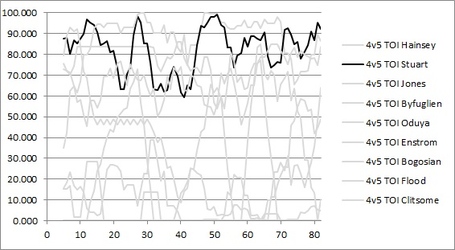 That's quite the drop in 5v5 time as the year wore on; I think it was apparent to Noel that Stuart wasn't quite the best guy to have out there to shut down the opposition in our fight for the playoffs. You have to think that Hainsey and the Grant Clitsome acquisition cut into those minutes a bit. 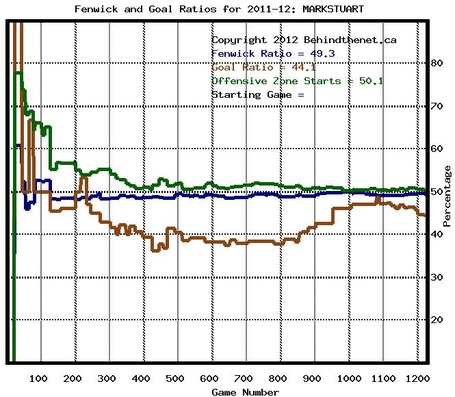 Well, that's somewhat surprising...Stuart wasn't altogether disastrous out there. And it appears he experienced a bout with some crummy puck luck. It's very possible that Stuart has gravitated to precisely the right role for him: 3rd pairing defenceman. I probably wouldn't trust him on the kill, though - he was truly horrific last year.

Curiously effective at evens, but atrociously bad on the kill. Since the kill only constitutes a small proportion of ice time, Stuart stays out of D- or worse territory, but it stands to be said that, even with very average competition and zone starts, Stu was a marginal defender with zero offence.

At a $1.7m cap hit, Stuart was holding down young players like Arturs Kulda ($575K) and Brett Festerling ($577K) who could've done, at the very least, a similar job on 3rd pair and the kill. His only saving grace with that kind of contract is the passable play at evens, but I still cringe at the fact that we have a number of guys at St. John's who truly need the experience and were held back because of Jets' faith in Stu.