Where Tim Stapleton was the lightning rod for debate this year, pretty much all of us agreed on Alexander Burmistrov: the kid is talented. Whether it was using his speed to make some pretty awesome backchecks, or plucking the puck off players' sticks on the kill, or dangling with the puck on a string, we could all see the potential radiating off the former 1st rounder. Unfortunately, it seemed like all the verve we had for him early in the year faded with the boxcars later in the season, and since the more sensational Jets writers (not at AIH) suggested he might need AHL seasoning to right the ship, we ought to take a closer look. Y'know, before we throw the baby out with the bathwater. And he does look like a baby. 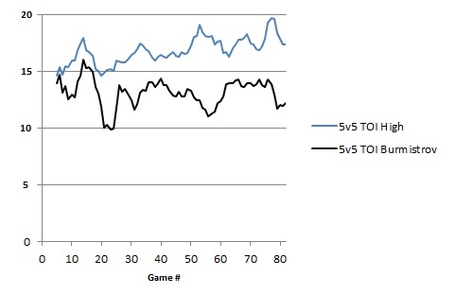 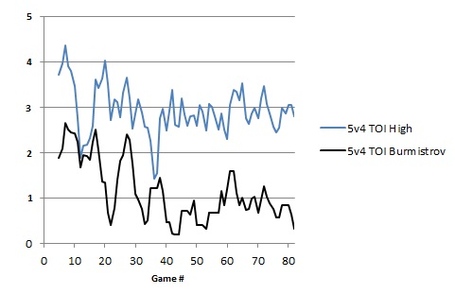 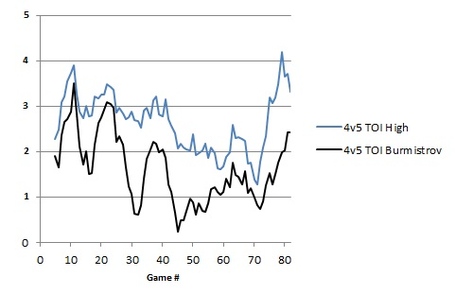 Such a weird set of charts, as we see both his 5v5 and 5v4 minutes decrease as the year went on, yet his 4v5 minutes stay roughly the same. There are definitely opportunities lost here, in particular opportunities for Burmistrov to display his offensive talents. The primary opportunity gained was one to engage a narrative about another enigmatic Russian who needed to be sent down, when the real enigma was Claude Noel. 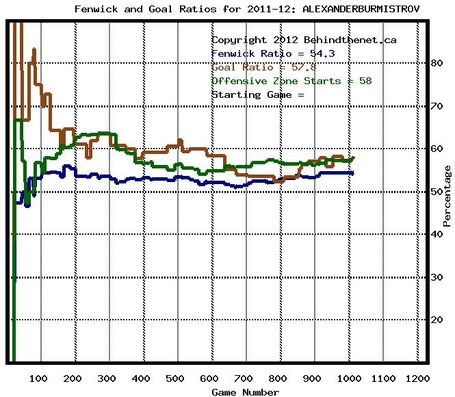 This certainly has the looks of a plus player who could take advantage of a nice assignment, not a guy who needs to be sent down. Granted, the difference between good and mediocre players on this latter chart seem like thin pie slices, but surely you can see that we should be talking about other players on the roster first if the conversation turns to demotion.

The guy's possibly our best penalty killing forward, he's good at drawing penalties, and he plays a sound evens game (albeit a cushy assignment). Noel did some damage in Burmi's usage and didn't allow him to snap his slumps...I give Noel a pass because he's new to the roster and needs to figure out his players, but I don't give a pass to anybody engaging the narrative that Burmi doesn't belong in the NHL.

Burmi's $1.5 million cap hit, and another year off his ELC, were poorly put to use. You can blame Atlanta management who threw him into the fire too early for the fact that next year is his last entry-level year. I'll hold Burmistrov to the fact that he only managed 28 points, but for an adept penalty killer who played a good evens game I otherwise believe this was a pretty good cap hit for the return. Let's hope we don't do anything stupid going into next year - give the 20-year old a chance. And preferably at wing, please.