The "Little" of Ladd's Little Wheeler was probably the most inconspicuous, a place you wouldn't have supposed he'd be after his 31-goal 2008-09 campaign. That season hangs like a scythe over judgments of Bryan Little's career, unfortunately, nevermind that his shooting percentage that year (18%) is usually a number reserved for the best of the best or the big, park-in-front forwards in any given year (a group that included Kyle Wellwood in 2011-12). I say "unfortunately" because he's turned into a pretty nifty even-strength player over the last three years, and really the jury should still be out on whether he can return to 30 goals (it's more of a matter of usage and shot volume than talent).

I will say that you'd like to see more powerplay points out of the guy getting the most 5v4 minutes. He and Andrew Ladd were the two trusted members of Ladd's Little Wheeler to get 4v5 minutes, which lends more credence to his two-way abilities. 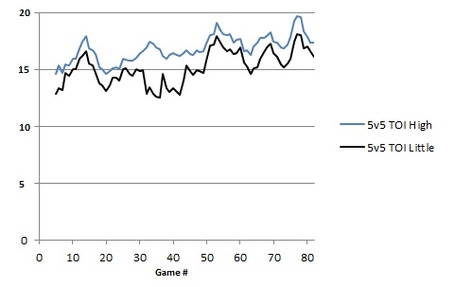 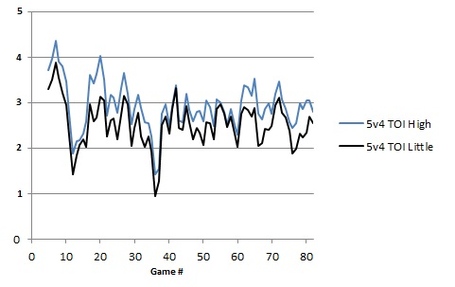 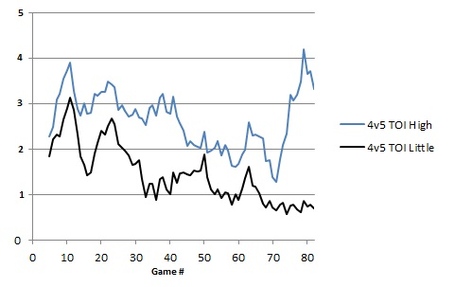 It appears that Noel was pretty well committed to Little everywhere but the kill, where the higher stakes of the late season saw his 4v5 time decrease. There's logic to a move like that, particularly if a player's 5v5 time is slightly going up (as Little's did). 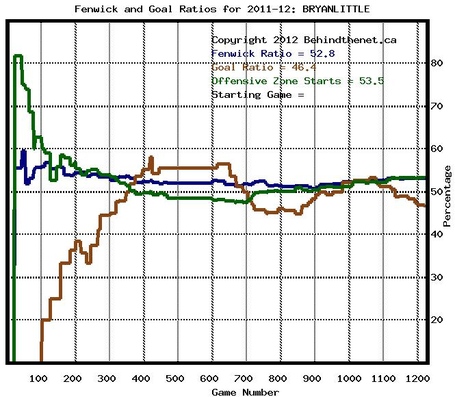 Little had a noticeably slow start goals-wise, so luck might have had an influence on his final boxcars (though he did manage the second-best goal total of his career - 24). Once again, I think he'd be a more conspicuous player if he shot the puck more - he's like the sniper version of Kyle Wellwood. The killer with him is his faceoff-taking abilities have never really come around (46.7% on the road last year)...but if you're the Jets, you'll probably really avoid the idea of breaking up that forward line.

He's a really solid player at all strengths in terms of possession, but you'd really like to see his and Wheeler's shot totals reversed. You'd also like to see more production out of your top 5v4 forward minutes, and better faceoff numbers.

He cost us a grand total of $2.38 million towards the cap last year, which is a very good number for an every-minutes forward who scores 24 goals. In general, Little's career trajectory has actually made him a bargain player for every one of his five NHL seasons, and the Jets will stand to benefit for one more year before having to negotiate his RFA status.