As you might recall, Johnny Oduya was rewarded with a pretty nice contract from the Chicago Blackhawks recently, after we had sent him along for a 2nd and 3rd round pick in 2013. Nevertheless, it is good to have a look at how he was deployed vis-a-vis our other defencemen, just to see where he fit and what holes needed to be filled after he left.

As you can see, he wasn't a top-minutes defenceman for us, so to get a pretty decent shot at an NHLer with two early round picks is a good deal for us. I'm not even going to mention the fact that, early in the year, he seemed to be Randy Jones-ing it all over the place. Okay, I mentioned it. 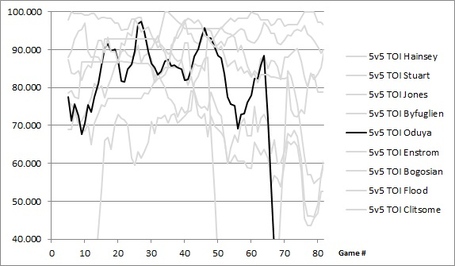 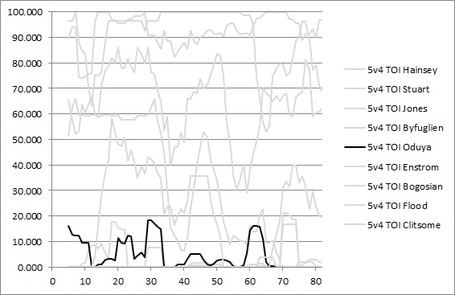 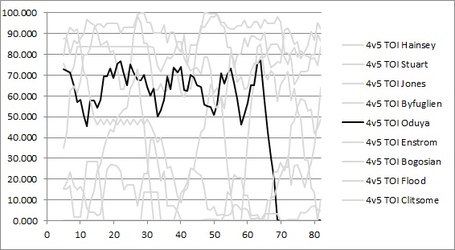 He had Noel's wavering confidence, it seems, as his 5v5 time pogo-sticked and he wasn't the first, second, or third option on the penalty kill. Obviously, that drop-off is from when he left via trade. 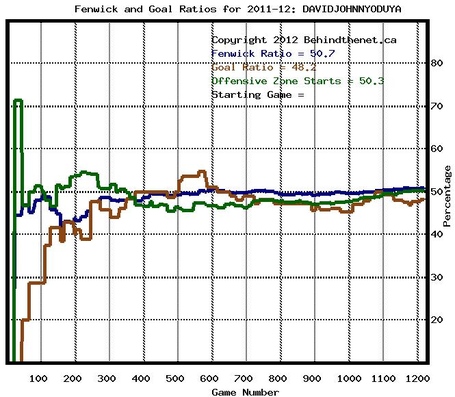 In general, pretty much an average performance.

He wasn't extraordinary nor disastrous in his assignments, and he actually played pretty well on the kill. Near-zero offence out of the guy means he needed to be plus value defensively for me to give him any more than a C here, so there you go.

He gets a little bump here...D prices have inflated a little bit, even for defensive defencemen (take a look at the top 50 D cap hits), so Oduya's $3.5 million cap hit last year for (essentially) good PK'ing and marginal play at evens was not as crazy as it seems. I mean, I'd never pay that much for it, hence the grade is still down there, but compared to the rest of the league it's not an out-there contract. I guess the biggest knock I have is that he didn't get tons of defensive minutes, particularly on the kill...but I hesitate to downgrade him much for that.