Did Tanner Pearson's Linemates Carry Him? Breaking Down the Barrie Colts' Trio

Share All sharing options for: Did Tanner Pearson's Linemates Carry Him? Breaking Down the Barrie Colts' Trio

This season, the OHL's Barrie Colts' top line consisted of Mark Scheifele, Ivan Telegin and Tanner Pearson. The trio combined for over 100 goals and nearly 250 points this year so they're kind of a big deal. Scheifele and Telegin, as you may know, are current Jets prospects. Tanner Pearson, meanwhile, has been the topic of a lot of speculation as we approach this year's draft and rumour has it that he may be a future Jets prospect as well. With photos, tweets, and a full writeup about Pearson on the team website, the Jets certainly aren't doing anything to squash that rumour. With two Jets prospects and one potential future prospect all playing on the same line, I thought I'd take a look at their production this season. Who is really driving this line and who's along for the ride? And just as importantly, who can score on his own? Keep reading after the jump for the results.

Tanner Pearson, the draft-eligible forward in the Colts' top trio, came out of nowhere to lead the Colts in goals (37), assists (54), points (91), and plus/minus (+21, tied with Scheifele) this season. The question with Pearson: is Pearson just a late bloomer or is he riding the coattails of others? Let's take a look. First up, Pearson's season:

One of the criticisms of Pearson has been that he may be riding on Mark Scheifele's coattails. As the stats show though, Pearson wasn't just riding on the coattails of Scheifele and/or Telegin. In fact, his production was significantly better when Scheifele didn't play (13 GP, 11 goals, 21 assists, 32 points for) than when Scheifele was in the lineup (.55 goals/game and 1.25 points/game vs. .85 goals/game and 2.46 points/game). Another nice sign is that over 70% of Pearson's goals came away from the power play. How about Pearson's goal breakdown? 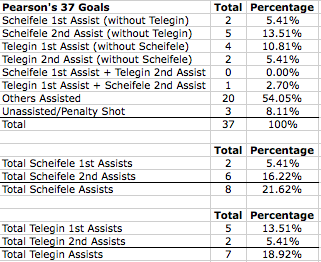 For most draft-eligible forwards, numbers like that would be reason to get awfully excited. Scouts would be drooling over production like that. With Pearson though, there's a catch, and the catch is that Pearson was born in 1992 and passed over twice in the NHL Entry Draft, first in 2010 after playing in the Greater Ontario Junior Hockey League, then again in 2011 after his first OHL season. And while Pearson had a fantastic OHL season this year, 1992-born players are expected to have a fantastic season.

The argument for Pearson is that Pearson is now performing like you'd expect a drafted 1992-born player to perform, so he's worth drafting now. That makes some sense but I'd be hesitant to pick Pearson early on (especially at #9). The real question is if he will continue to improve at this rate or has he nearly peaked?

As everyone who's followed the Winnipeg Jets in any way, shape or form knows, Mark Scheifele was the team's first round draft pick in the 2011 draft. After starting the season in Winnipeg, he returned to Barrie and had a solid but unspectacular draft +1 season.

Admittedly, Scheifele's numbers here are a lot less interesting, in large part because Scheifele joined the team a bit late and because Pearson missed very few games this season. Without Pearson in the playoffs, Scheifele's numbers declined from 1.34 points/game and .49 goals/game to .92 points/game and .38 goals/game. I can't say if that is because of Pearson's absence (he missed the entire playoffs due to a broken leg) or simply stiffer competition in general, but we'd certainly like to see less of a dropoff. Perhaps the most encouraging part of Scheifele's stats this year was his scoring when not on the power play, as his numbers away from the PP were 18-29-47 in 47 regular season games. Only 21% of Scheifele's goals this season came on the power play. How did Scheifele's goals breakdown? 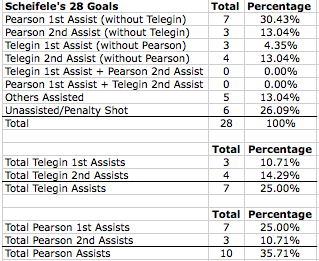 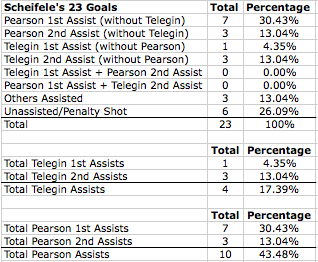 Telegin was a 4th round pick of the Atlanta Thrashers in 2010 and will likely begin his professional career next season. Telegin led the Colts in goals/game this season and generally performed as a drafted future NHLer is expected to perform in his draft +2 season.

The first thing that stands out to me about Telegin's numbers is his 35 goals in just 46 regular season games. That is a spectacular pace, more than double his goal scoring rate from last season, and would have seen Telegin finish 2nd in OHL goal scoring had he played a full season. For some reason though, Telegin hardly seemed to get any recognition for it, at least in Jets circles. In addition, there is a dramatic difference in Telegin's scoring rates with and without Pearson in the lineup (keep in mind the sample size though). In 16 games without Pearson, Telegin scored .50 goals/game and 1.19 points/game. In 43 games playing with Pearson, Telegin scored .74 goals/game - a 50% increase over his goal scoring rate without Pearson - and 1.37 points/game. Four shorthanded goals (and a fifth in the playoffs) is nice to see as well. And while 3 games shouldn't count for much, it's also encouraging that Telegin seemed to have little trouble scoring without his linemates. Now for Telegin's goal breakdown: 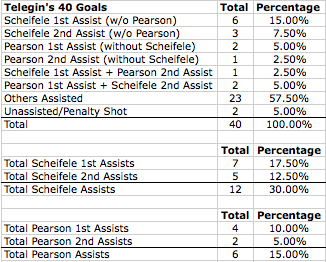 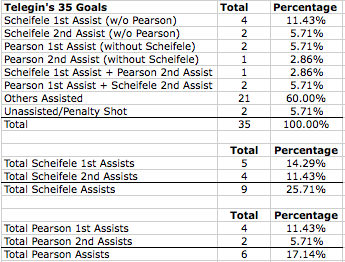 So what have we learned from all this?