The last of the GST Line to be profiled here, Tanner Glass, is possibly the most affable guy of the three - known to Scrabble with bloggers, travel to far-off lands, and play a little fantasy baseball. Like the other two, he was saddled with extraordinarily tough minutes, and in what seems to be a weird coincidence among former Ivy Leaguers (Dartmouth) he was also one of our truculence representatives. Both Glass and Jim Slater were on the block for UFA status this offseason (Slater signed a 3-year, $1.6 million/yr deal), so the Jets' decisions on those two will really determine whether they believed in the mythology of that line or realize they'd be better served in letting those guys find a chance where they might not get dumped on quite so much.

I don't care who you are, it is very difficult to light the lamp under these kinds of circumstances. That said, neither he nor his frequent 4v5 partner Jim Slater were particularly effective on the kill, so despite the minutes I'd hesitate to say he provided a ton of plus value there. 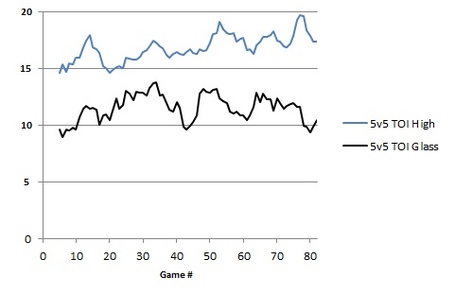 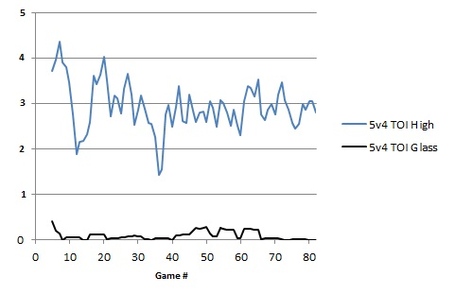 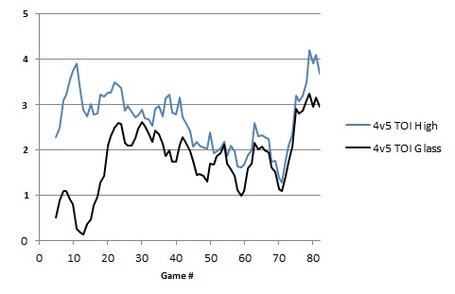 As you can see, there was an increasing amount of trust placed in Glass to handle 4v5 minutes, though it appeared to be more of a maneuver to keep tough playing time off of other players rather than confidence in his (or Slater's) penalty killing abilities. 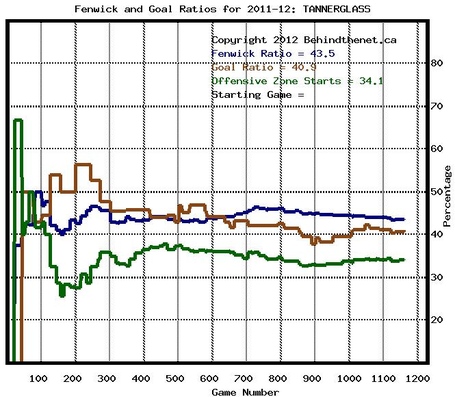 A chart of the nothing-to-see-here variety, though he might have been a smidge unlucky goals-wise. Really, nothing to be extraordinarily surprised by, as these have primarily been numbers repeated throughout his career (see the charts from 2010-11, or 2009-10).

I really want to find a positive spin for a guy like Glass, but I can't for this past year. Yes, he had a rough assignment, yes he set career highs in his offensive boxcars, but by the numbers it just wasn't a good year for him.

He only cost 750K, and I hesitate to compare that to the 700K for Kyle Wellwood since Welly's case is so rare in the NHL. But even compared to the return for Tim Stapleton (525K), this is not good. I give him the D- rather than an F because (stats be damned) he seemed like a positive player for team psyche.