Let me start by saying that I'm sure Chris Thorburn is a nice guy. Let me continue by saying that he scored one of the best goals of the year for Winnipeg, and he sacrifices his body for the sport in a number of ways. He's a pretty good faceoff man, too, but that asset is under-utilized. That said, he's a fringe player in the NHL, who would probably play quite well down in the A. We don't treat him that way, we don't jostle him up and down between the two leagues, but on most other organizations that's exactly what he'd be doing.

When you get used the way Thorburn has the last year, I think you have a pretty good idea of what the organization thinks of you. Then again, the Thrashers were the ones who decided to give potential buyers the middle finger by giving the guy a 3-year pro contract, pretty much guaranteeing Thorburn a hearty salary whether up in the NHL or down in the A, so there you go. I won't pretend to know how he feels about it, but if it were me I'd rather be a good AHL player than riding pine and getting crap minutes up in the pros. 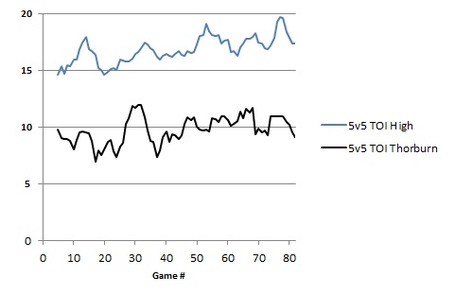 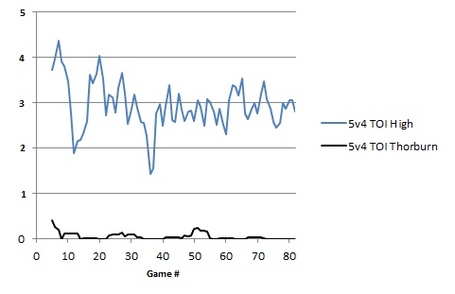 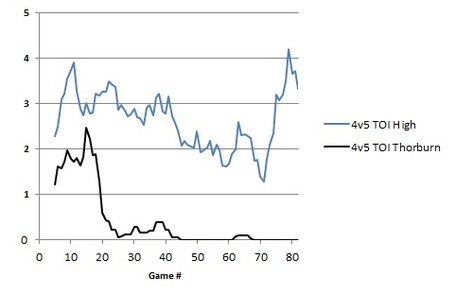 It's a bit of a depressing picture, but you really see the faith in Thorburn drop off in the 4v5 figures. With two years left on that contract, I don't really see where Winnipeg goes except either hanging on to some irrational belief in the value of GST or making him a wealthy AHLer. 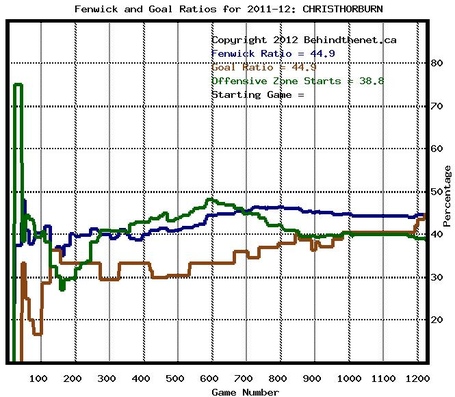 Yes, the guy got saddled with some really rough zone starts, and his Corsi Rel (-21.8) was better than common linemates Tanner Glass (-24.0) and Jim Slater (-27.9), but he was still about 10 shots worse than players under similar circumstances.

Thorburn got totally crapped on in terms of usage, and he didn't do as poorly as his linemates. But he did do poorly, which informs the grade.

We are not getting completely hosed on the deal, but at an 866K cap hit, we have an essentially replacement-level player. You'd like to see a little glimmer of hope out of that number, whether it be positive play at 5v4 (Tim Stapleton) or two-way upside (Patrice Cormier).