The NHL's Most Interesting Name: And the Winner Is...

Share All sharing options for: The NHL's Most Interesting Name: And the Winner Is...

The original enigmatic Russian who wasn't even Russian, Zarley Zalapski exhibited a penchant for hockey and mullets at an early age. Though his bouffant hairstyle would go through a variety of fashions (including Mark Messier tugs and some Brendan Shanahan reshaping) before settling on what looks like a prison cut. Hair aside, he was a legend in Hartford, so revered that I guess Joe Pelletier had to bring him down a peg by eviscerating him in his "legends" piece. To be fair, it was no secret that Zalapski was a bit more offensively-inclined; nobody knew that better than Zalapski himself...watch as Mike Lange tries to tell him that defence is "a strong part of [his] game" (1:28) and he's "the best [defender] in the National Hockey League one-on-one" (2:04). A lot of "uhs" and "I'd like to get better". Don't listen beyond his responses to those, by the way, because he also mastered the art of the boring hockey player interview. To finish on a high note, here's Zarley getting pwned by Owen Nolan.

Peanuts was born a poor Irish farmer's son in the Ontarian countryside, and his first set of skates was made out of legumes. He would sneak out of choir practice to play pickup games with his friends Seamus and Liam Rooney, with a puck fashioned out of peat moss from the Old Land. He got his name for his famous obsession with peanuts; he kept one inside each glove during games, and would constantly munch on them between periods. He also passed out from dehydration a lot. But nevertheless, he showed a good Ontarian spirit and a flash of the luck o' the Irish, playing 25 seasons of pro hockey despite only playing 21 NHL games. Also, he survived WWII as a pilot, that's pretty lucky. I have nothing to verify the above story, just like I have nothing to verify that Andrew Ladd inherited O'Flaherty's eyebrows.

Here it is, the big reveal: Peanuts totally wasted Zalapski. The big reveal in picture form: 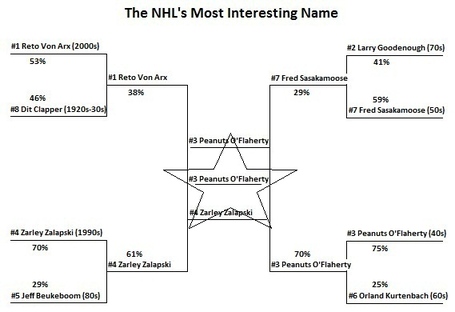 Your winner, with 70 percent of the vote, and the man with the NHL's Most Interesting Name, Peanuts O'Flaherty.

P.S. If you're coming to this series for the first time, or just want to reminisce, be sure to search "nhl's most interesting name" in our search box above and to the right to see countless other great names. Peanuts might be king, but there were plenty of noble knights left behind.