Kyle Wellwood is probably the most intriguing player on the roster, a guy who was signed for peanuts but established himself as one of the better forwards over the course of the season. That meteoric rise has to be kept in perspective in regards to time on-ice; he certainly earned significantly more ice time, but as we'll see it was rare to see him in a top-line role (perhaps to some people's, certainly my own, frustration).

It's just aggravating to me even now to see those forward ranks. Probably the most nagging part is that this guy is a very capable faceoff taker, yet we definitely didn't use him in that capacity (250 faceoffs 5th among forwards; 54.0% success rate). 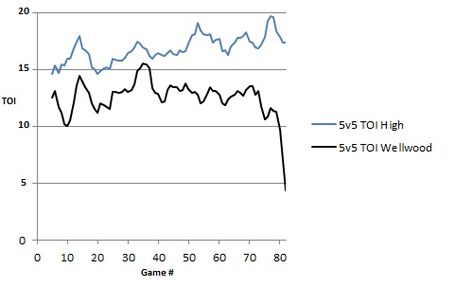 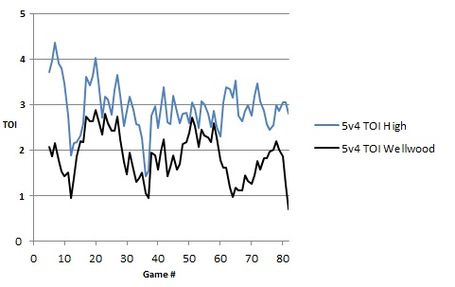 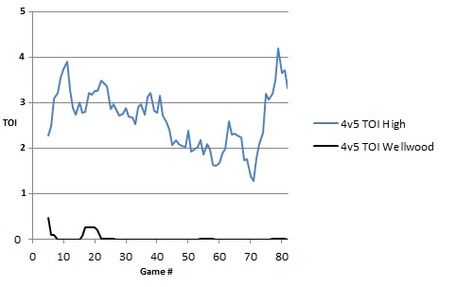 Intuitively, I would have guessed that Welly's quality play earned him increasing ice time over the course of the season, but that was clearly not the case. On the contrary, his time at evens didn't follow the increase later in the year, and more importantly he seemed to have a big drop in powerplay time around game #60. I'm curious now to see if there was a justification I'm missing... 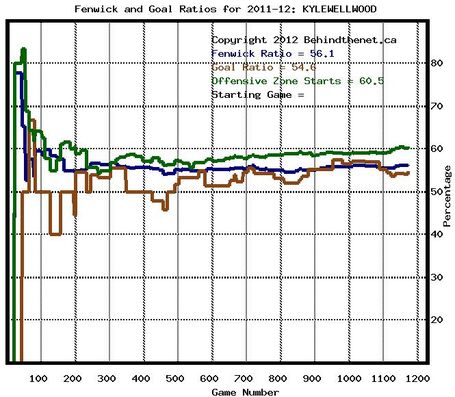 If anything, it looks like a little puck luck got in the way of an even greater offensive season, but nothing in his Fenwick suggests he played any worse throughout the year. In my mind, it's just another frustration in a string of frustrations with Welly's usage.

He's not Steven Stamkos, but Wellwood took his favorable offensive minutes and did great things with them. One of the things not measured here is his determination to avoid minor penalties, which doesn't appear to affect his productivity on the ice and, conversely, reduces the penalty kill time of his team. I personally believe a bit more faith in the guy would have netted him even more than his 18 goals and 47 points. Played great at evens, by the way, and he was a bit unlucky PDO-wise to boot.

700K? Are you kidding me? (this was the oft-repeated phrase of the year in the AIH comments sections) The only sad part is, with a good agent, he might not return for less than $3 million.